Triple Dakar Rally winner Marc Coma of Spain has renewed his contract as a factory rider with KTM, the Sportsmotorcycle specialist brand from Austria. Coma will continue to compete for KTM in top international rallies and has expressed his desire to stay loyal to the brand where he started his career as a factory rider.

“I am glad to have been part of the KTM family for 10 years now and I want to finish my career with the brand where I first started as a factory rider I am looking forward at the next challenges and I’ll be racing in the Pharaons Rally and the Morocco Rally in preparation for the 2012 Dakar Rally,” Coma said when he signed his contract.

Senior KTM officials also expressed great satisfaction that Coma will stay with the brand. Pit Beirer, Head of KTM Motorsports said: “We are proud to have had Marc with us for such a long time. Together we have achieved fantastic results in Rally sport over the past years and we want to achieve even more in the coming years. Marc is a great example of professionalism and of commitment to the sport and to KTM. Without a doubt he also represents pure motorcycle passion. Rally is extremely important for KTM and with Marc we have a true great and a superb rider on our 450 rally bike. ”

Heinz Kinigadner, senior company official, former Motocross World Champion and motorsports consultant to KTM said: “Rally needs strong characters and lots of extra motivation and Marc has proved that when things are tough he is even stronger. Today he is not only a fixed part of the KTM family but also part of our company history.”

Universally recognized as one of the finest exponents of rally sport, the Barcelona native first joined KTM to compete in the Dakar Rally in 2003, where he finished third in four stages and firmly established himself as a serous contender for what is recognized as the toughest rally in the world. Coma went on to win the Dakar in 2006 when the even was still being staged on the African continent and then again in 2009 and 2010 in its latest version through South America. He was also World Rally Champion in 2005, 2006, 2007 and 2010 and so far this season has competed in and also won both the UAE Desert Challenge and the Sardinia Rally. 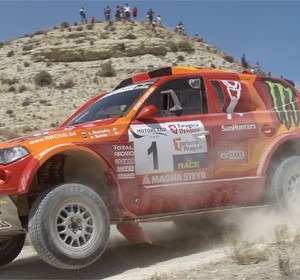 After two Bajas in Spain and Hungary, X-Raid pilot Leonid Novitskiy has increased his advantage beside his main rival Jean-Louis...
Copyright 2011-2016 Rallyraid.net - RISE Network. All Right Reserved.
Back to top