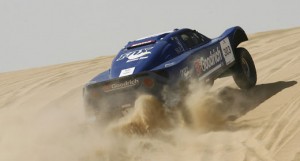 The 14th Edition of the Pharaons Rally is an event with a real international touch. Last year winners have already confirmed their presence, so Marc Coma will run among the bikes and Jean Louis Schlesser among the cars. Thus all is getting ready for their fast journey in the thrilling Egyptian desert.
Less than one month and the lights of the fourteenth edition of Pharaohs Rally will illuminate the final round of FIM World Cross Country Championship and the penultimate meeting of FIA World Cup.

This fun adventure in six legs is getting ready, with the marvelous Giza Pyramids being the opening door to the infinite spaces of the Egyptian wilderness, to its stretched chains of dunes, to its caravan trails traced by merchants among the oasis for ages.

The talents attendance is definite and they will enliven the event as two main characters well-known for their passionate performances among the burning sands. It’s last year winners: Marc Coma and Jean Louis Schlesser, yet more motivated to climb again to the top. The Spanish biker has his name four times in the golden book of Pharaons Rally, and Egypt has become the mandatory appointment within his program of approach to Dakar. Schlesser has come back to Egypt last year after long time and he’s again in love with the Pharaons race, an ideal terrain for his buggy. 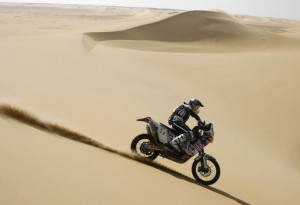 Almost three thousands kilometers of pure technical terrain and great fun are waiting for drivers and riders from October 3rd, the day of the grand opening of the best event of the World season. Thanks to the precious support of the Egyptian Ministry of Tourism, Pharaons Rally is the ideal event – at its fourteenth year in a row – to discover the most remote corners of a stunning Country, that still hides many secrets inside its desert. A caravan of 500 people will parade across those unique corners full of beauty, accompanied by the fierce lines of roaring competitors that are chasing their self-challenge, through this mysterious Country.

All last details are being perfected by the organization while waiting the “opening” where the main actors will start their play, together with many other equally important actors with them.

Among bikes we cannot miss Helder Rodrigues, looking for his first victory of this World Championship, challenged by Przygonski and Coma. The young Pole will be playing accompanied by his Orlen Team, with Marek Dabrowski and Jacek Czachor. Also Jordi Viladoms is looking in Egypt for his redemption after his accident in Sardinia, while there is quite much expectation for the return of Francisco “Chaleco” Lopez, after the dramatic accident he suffered last May in Tunisia.

Among cars too there are many claiming the throne of “king” Schlesser: starting with a very strong duo of Toyota’s Jun Mitsuhashi and Alain Guehennec, to continue with Dessoude Team, three cars of Objectif Dunes Team, Rally Raid UK Team and the tough Egyptian Team of Rahhala Racing.

Registration at the 14th Pharaons Rally are still open and other important entries are on the way…
Stay tuned with the Pharaons International Cross Country Rally, more surprises to come! 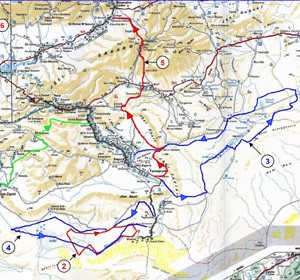