The last stage of Pharaons Rally between Tibniya and Cairo caused an earthquake in the standings. The day triggered unexpected changes in the race: Jordi Viladoms (Yamaha) and Marek Dabrowski (KTM) left the race due to broken engine and Andrea Mancini was victim of an accident that resulted in a shoulder luxation.

Marc Coma took the lead the whole week and kept the lead until the end. The Spaniard didn´t have to face any misfortune and same for Helder Rodrigues, winner of this last stage. The Portuguese and Coma finish even in number of victories, three each, but the Spanish adds a new record to his profile. By this new victory in Pharaons, he marks his fifth victory with which he overcomes Fabrizio Meoni, who carried the record until now.

Pharaons 2011´s overall standings are leaded by Marc Coma followed by Helder Rodrigues and Jakub Przygonski in the third place. The Polish rider wasn´t happy but only satisfied with his performance. Helder Rodrigues signs his first success in the World Championship, which was only the honor of Cyril Despres and Marc Coma. On final standing of 2011, Jakub Przygonski has 78 points and Marc Coma (absent in Tunisia) has 75 points acquired in three victories: Abu Dhabi Desert Challenge, Sardinia and Pharaons.

Marc Coma: The Dakar is his priority!

The 35 years old rider, winner of Dakar 2011, will try to keep his title next January, facing his adversaries that he knows by heart: Despres, Rodrigues, Casteu and Lopez… At the finish, Coma´s hear beat fast as it reminded him of the times where he was riding along with Fabrizio Meoni and Richard Sainct, masters that quitted the discipline too early. “I hope that, from where they are, they share this victory with me!”

The Spanish rider shared his opinion concerning this year´s edition of Pharaons Rally. “It was complicated, hard and long, with the toughness we feel in some races. It is a world championship leg quite complete. Landscapes were amazing but we didn´t have a minute to enjoy it. It is, honestly, the best edition that I´ve ever participated in.”

Concerning his KTM, Coma said: “Modifications were applied to the bike after the Dakar. We simply validated some choices adapted to the different kind of ground so it could be as much reliable as possible. We have still two month to go, so the moment to prepare the Dakar seriously is now.” 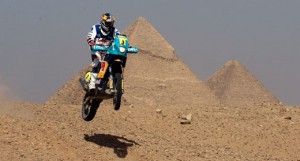 Helder Rodrigues (Yamaha 450) : “I couldn´t be happier, it´s a dream come true to become the first Portuguese World Champion in Cross Country Rally 450. Here in Pharaons I run with lots of psychological pressure because of it, because in this sport anything can fly away with the least mistake but I am here, second of the rally and World Champion. I couldn´t ask for more!”

Jakub Przygonski (KTM): “This Pharaons Rally was a nice race to prepare the Dakar, mainly to test the engine. At this point, I am quite satisfied because I only used one engine in six days, and my goal was to keep one for 7 or 8 days in South America. It is positive for me that I raised up my pace compared to last year. I feel that I have made some progress and I was really fighting against Helder (Rodrigues), Jordi (Viladoms), even if Marc Coma stays far beyond. My next race, Morocco, will be to work out other technical subjects. Concerning the World Championship, I finish second and that makes me happy. I even finish three points in front of Marc Coma, and that is great!”

Francisco “Chaleco” López (Aprilia 450): “I am quite satisfied. I reached my goals, I came here to see if I was apt to continue in rally raid and my answer is yes. Of course my spirits is still competitive and as last year I was in the podium, I would have liked to be there again, but after five month of absence after the accident, to be able to ride with the top is not bad at all.” Lilian Lanceleeve (Quad): “I came to Pharaons two years ago and this year was definitely a lot harder. Egypt changes a lot from our 3 km motocross track in San Martin in the Caribe, so I am very proud of my result! I came to have fun and I won! It took lots of efforts and I am so tired I can´t even move anymore…” 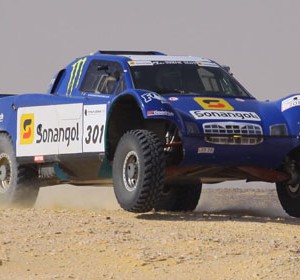 Two men stood alone in the desert darkness. They had a question to discuss but it wasn't a long conversation as the decision...
Copyright 2011-2016 Rallyraid.net - RISE Network. All Right Reserved.
Back to top