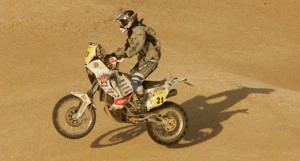 The first edition of the Dakar Challenge, organised on the recent Pharaons Rally, was won by Edouard Boulanger. At the age of 32 years, he has grabbed the opportunity to take part for free in his first Dakar.

By entering the Pharaons Rally, Edouard Boulanger was preparing to close the door on a period of his life, a period he spent in the world of rally-raids, to be precise. However, the years spent preparing routes in this discipline proved to be particularly profitable when he climbed on to his Aprilia bike. On completion of the first special, the French ex-pat living in Italy was already in the lead of the Dakar Challenge, a competition reserved for amateurs, with the reward for the winner of a place on the Dakar. “I’ve always been in good shape, but I never imagined that I could win, because I don’t ride that much. I don’t even have a bike at home,” exclaims Edouard, who nonetheless was still able to rely on some not inconsiderable assets. Several times junior French and world champion in rowing in his youth, this enthusiast of endurance events of all types is especially skilled in navigation: “It’s true that reading a road-book doesn’t hold any secrets for me and it’s one of my major strong points. It helps me plough my own furrow without worrying about the others, which makes it a lot less stressful and allows me to concentrate fully on riding. What’s more, I’m careful to ride at 80% of my capacity, to make sure I always have something in reserve”. 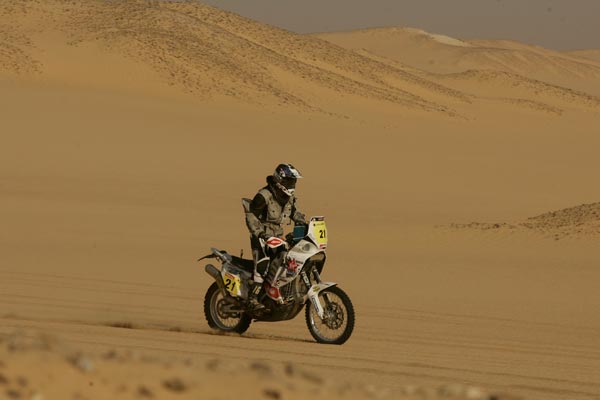 This method worked perfectly, because in the end Edouard finished 5th on the Pharaons Rally, easily winning the Dakar Challenge. “Following a first attempt in 2005, it’s the first time I’ve finished a rally and, lo and behold, I’ve managed to pick up my first victory!” says the rider who also won the “twin-cylinders” category. Despite the potential he displayed in Egypt, he is not letting himself get carried away with setting goals for the forthcoming Dakar: “For me, the main thing is that one of my childhood dreams is going to come true: I’ve been dreaming about the Dakar for 25 years! So it would be absurd to put the pressure of a grabbing a high-placed finish on my shoulders”. 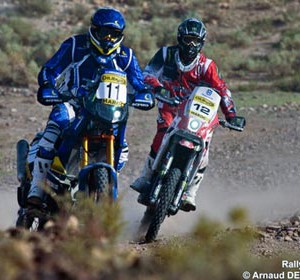 Almost 300 km between Ouarzazate and Zagora, the first stage of the OiLibya Rally of Morocco has already been eventful. The selective...
Copyright 2011-2016 Rallyraid.net - RISE Network. All Right Reserved.
Back to top