Pharaons: …As the Dust Settles 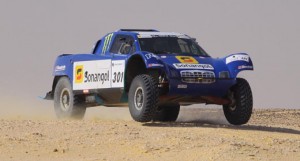 Two men stood alone in the desert darkness. They had a question to discuss but it wasn’t a long conversation as the decision wasn’t a hard one to make. Drive cautiously and settle for 3rd or push and try for second..? 16 minutes to make up and one last 350km chance to do it. “Push!” they both said together.

Jun Mitsuhashi started this last day with a 16 minute cushion over the determined Russian Boris Gadasin. “I have no plan, just drive fast!” he said last night but his Toyota is a T2 ‘Production’ class car; whereas Gadasin’s is a monstrous scratch-built 7 litre V8… yet the battle didn’t end like either were expecting… 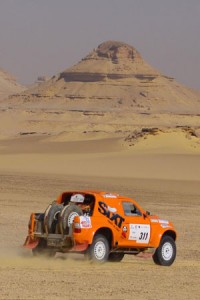 Saeed parked up at a place where the route came close to the tarmac road and as has become quite routine over the last few days Jean-Louis Schlesser came into view ahead of his dust trail and seeing we weren’t so far from the start we waited expectantly for the rest of the field… and waited… got back in the Dually and turned the A/C on… and waited… until we saw Vadym Nesterchuk in his bright orange Sixt Ukraine Mitsibishi L200, which mean only one thing; that both Mitsuhashi and Gadasin had hit some sort of serious trouble.

100km up the road at CP1 we found a few service trucks waiting for the racing cars that needed some quick work doing on them and the G-Force mchanics said that they were waiting for Boris to limp in after a bad roll. The Toyota team, all with dismayed looks on their faces still didn’t know what had happened to Mitsuhashi.

Ilya Kuznetzov was the 3rd car by and was powering across the dusty plains, so obviously the electrical problems of yesterday were fixed, but then there was a long, long wait. One of the Rallyraid.co.uk Desert Warriors was next, the nice blue one of Karim El Zanaty, but there didn’t seem to be too much point in waiting around so we headed back to the finish. The last night’s hotel is never an easy place to find people to interview but Gadasin’s co-driver Dan Schemel was in the lobby trying to book himself in. “Well, sometimes in this sport, like life in general, I suppose, if you really want something you have to take risks to try and get it… We decided to try and push as hard as we could to have every chance of getting 2nd, but there was a huge drop on one side of a dune… we were going so fast and it was so far down that we landed on the roof before rolling quite away. It’s a very strong car though, so we were OK, but the suspension was damaged a little too much so we waited for the T4 fast service truck to catch up with us… so many hours were lost…” 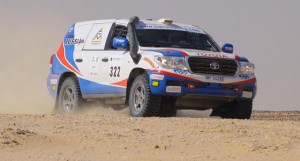 On top of the T2 championship is Russia’s Ilya Kuznetsov. “No doubt today has been the best day for us because we had some technical problems during the race but today there were others that had problems and not us and now the rally is finished we can now celebrate that we are the winners of the FIA Cup in T2 Class!”

When we got back to the hotel in Cairo we found out from one of his mechanics what had happened to Mitsuhashi’s Toyota. “The tensioner arm of the alternator broke.. and that was it… finito,” he shrugged holding his arms up into an X. Someone else probably with a lot to say is Ukraine’s Vadym Nesterchuk, but try as I might I can’t find him or any of his team. The hotel we’re in is about the size of a village with the press centre, bar, canteen, parc ferme and casino all spread
out over a large area… and they’ll be cutting the internet off very soon…

From start to finish he made it look easy, but don’t forget that Schlesser’s buggy is only 2wd! “It’s rear engined, not mid engined, so the block hangs out over the back axle,” he explained. “But the 2wd advantage lies mostly in one place, not having axles or drive shafts means that the front suspension can have huge travel. And with the engine right at the back there’s less weight to land on the front after jumps and that’s great in the dunes. But this wasn’t an easy race. From the outside maybe it didn’t look too spectacular but it was a hard race. Just look at today. Everyone had navigation problems.. even we did, but that was because we were following Gadasin and he went the wrong way. And in the dunes everyone had a hard time… but it feels very, very good to win. And now to Portugal, but I don’t have so many hopes. I will need only luck to get a good result there as it is almost impossible to beat the BMWs on a Baja event.”

So the dust settles over the barren desert, the hunters never caught the Desert Fox and the FIA World Cup for Cross Country Bajas convenes again for the final battle in Portugal in 3 weeks time…

The last thing I would like to say a huge and grateful thanks to Saeed Al Hameli for driving me around for the whole week in the Dually. Really, a top bloke! 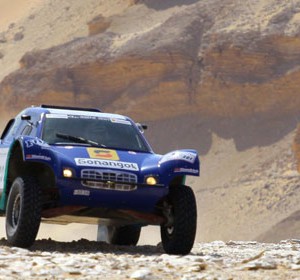 Today was billed as the event's hardest and at the time of writing, just before dark, only 7 of the 20 something field still...
Copyright 2011-2016 Rallyraid.net - RISE Network. All Right Reserved.
Back to top