Today was billed as the event’s hardest and at the time of writing, just before dark, only 7 of the 20 something field still running have made it back to camp. Some are enjoying a well-deserved beer, but many others are still in the desert somewhere digging desperately as night falls… 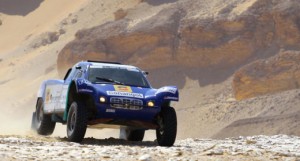 There was no access for the press to the dunes, the experience was to be for drivers only, but we found a nice place on the edge of a plateau, took some photos of Jean-Louis Schlesser as he ambled by and then waited patiently for those behind him. It should have been Jun Mitsuhashi next but instead it was Boris Gadasin in his G-Force Proto next, flying over the bumps that Schlesser had somehow slipped around and then the Mitsibishi of the Romanian Costel Casueneau before the
Japanese Toyota driver came into view… is he about to loose 2nd to the determined Russian? 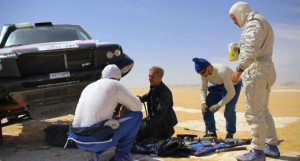 One Russian who didn’t come into view was winner of the first stage Vladimir Vasiliev. His G-Force lost a wheel near the start and the T4 service truck that was following close behind didn’t have the right part with it… and the T5 service truck was 400km away at the far distant CP… so his race, which started so brightly, came to an end. But remember his name, you will see it again!

With so many still missing the camp is a very empty place but one car, one of the RallyRaid.co.uk Desert Warriors, was proudly pulled up beside the service truck. Getting through the 444km stage in 5th place, and coming back so soon that team boss Beady had to kick the mechanics awake, were the two Peters, Merceij and Lanser. “Our speciality is driving at an average speed,” said the driving Peter. “If someone overtakes us then we don’t fight, but then we catch them again when they are stuck. OK, we got stuck in the dunes once, like most people, but we used the hydraulic jacks and let some air out of the tyres and we drove straight off again, and it was good to pass so much more expensive cars! 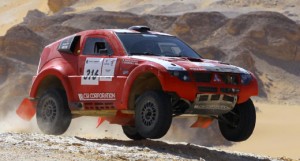 Making it through the stage, albeit more than two hours behind the winner was Costel Casueneau who was sitting on his truck today rather than lying under it, but it was not an easy day for the friendly Romanian. “We had a puncture, but what was painful was getting stuck 7 times! The path through the high dunes was very narrow and everyone had been through before so there was nothing easy to drive on, the sand was very messy. The last time was the worst and my co-driver was
sick all day, so it was a very good feeling to get to the finish today!” (And hello to Costel’s father who should be reading this! Your boy’s doing good, sir!)

Taking a fine 3rd place was Ukraine’s Vadym Nesterchuk in his Sixt Team Mitsibishi L200. “Actually I was expecting a harder stage,” he said. “The organisers did a good job of frightening everyone and the dunes were soft, yes, but if you had the right pressures in your tyres then it wasn’t too bad. The rest of the stage was good too, very fast and needed a lot of concentration, especially the white sand that reflect the sun. But it would be a bad stage for the guys in Production class. I guess there’s still a few of them out there… Oh, and the last 30km were great fun, constant jumps, all the way home!” 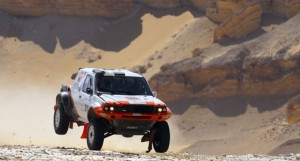 2nd today, a result that he wasn’t completely happy with, was G-Force’s Boris Gadasin. “We got stuck twice and we lost about half an hour because of this,” he shrugged. “But apart from that I really liked the stage. I don’t like just driving flat out, so I enjoyed the technical parts today. The dunes were very complicated, they had several rises on one face so you had to choose the trajectory very well. But something really positive is that this was the hardest stage, my cool-suit failed a couple of days ago, yet I feel fine… ready to go out and do it again!” 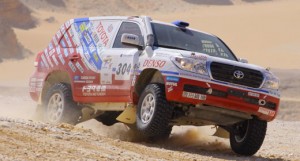 Seeing his cushion over the Russian cut by 10 minutes, bringing it down to just 16 was Jun Mitsuhashi in his Toyota Land Cruiser. “Again it was just a high speed course,” the affable Japanese driver said. “So I had nothing to do. We didn’t get stuck but had to find our way through the dunes a couple of times, changing our mind half way up and then starting again from the bottom… but it was hard… I’m sure that there will be a lot of people not coming home tonight. And tomorrow… with 16 minutes in front of the Proto… there is no other plan… just drive fast!”

In the same class and in the same type of car as Mitsuhashi is the much-liked Ilya Kuznetsov, but he didn’t have such a good day. “Just lots of small problems,” explained his co-driver Roman Elagin. “There was some electrical problem in the engine which meant that we had no power and after all the jumps we killed the shock absorbers… so we went very slowly to service in CP1… but soon the engine fault came back. We tried turning it off and on 10 or 15 times but all we could do was drive out slooooowly. But tomorrow everything will be fixed and we will go again.”

Top of the timesheet honour again went to the sand master whose nickname is Desert Fox… none other than Mr Jean-Louis Schlesser. “It was rough, rough, rough today!” he said, although he didn’t look as if he’d just driven more than 400 hard kilometres at top speed through the desert. “We didn’t have a single track to follow today, it was all off road! Some of the dunes were hard too and I had to concentrate a lot. There were tracks from the bikes everywhere but they are not useful to follow as they just go everywhere, so we had to find our own way… but it was very soft sand in there and they put the CP right in the hardest place..!”

Now one more stage, a 350km blast back to Cairo, is all that stands between the French master and a second consecutive Pharaons Rally victory, but perhaps more importantly it brings him to just 18 points behind championship leader Leonid Novistsky… And 30 are available in the last round in the Portalegre 500 in Portugal at the end of the month… But it will have to be just the road in front that he should concentrate on as last year he rolled on the same stage…  Mitsuhashi will also have to resist looking over his shoulder as Gadasin, who with a true never-give-up Russian attitude will be flat out again… 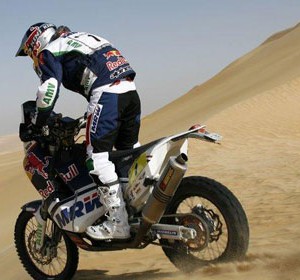 Marc Coma celebrates his 35th birthday today, and he offers himself a stage victory as a present! The Spaniard signs the third...
Copyright 2011-2016 Rallyraid.net - RISE Network. All Right Reserved.
Back to top