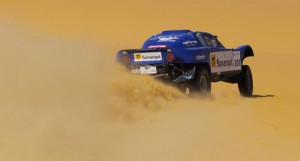 It’s no metaphor, we really were riding on a sea of sand. Saeed Al Hameli pressed his nose up against the windscreen to get the best view and as we touch 120km/h the Dually’s engine bogs a little, the horizon of a long pinkish outcrop fades from view and then it’s just sand and sky… and when we gently bottom out in the small valley between the crests the small ripples shudder the truck just like it’s a ship hitting a trough. Saeed is also a part-time fisherman and he says. “These are about 15 foot swells. If it was the sea it would be a bit rough!”

A few locals had followed the leading bikers to a 5 metre high drop-off and so marked a warning to the riders that  something interesting was just beyond. We parked up watched the mid-field bikes slither through and then it was the famous blue buggy sliding to a momentary stop before Jean-Louis Schlesser eased it over and blasted off with a wide powerslide around the outside of one of the quads. A few more bikes trickled by before a deep rumble preceded Boris Gadasin appearing at the top and he launched off to hit the ground with a thump and splash of sand. Then it was Jun Mitsuhashi in his T2 Toyota and G-Force’s Vladimir Vasiliev together and they wound away off through the small dunes side by side… 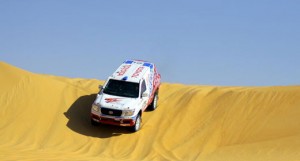 ack at camp many of the drivers didn’t think that the stage was so hard. The circular 339km route looped out from the bivouac into the scorched wasteland across flowing dunes, up the back of a plateau and then straight off the end of it. “Sometimes I caught a glimpse when I could look away from the road,” said stage-winner Jean-Louis Schlesser, “And the views were spectacular. Just a second here and there, or when we came to the edge of a ridge and you could see out to the horizon. I really enjoyed it. But the stage itself with such high speeds was a real challenge for the mechanics of the car… trying to keep the temperatures of the oil and water down while keeping flat out for such long stretches is a real challenge.”

Second again was the perpetually happy and relaxed Jun Mitsuhashi in his large Toyota Land Cruiser. “It was fast!” he smiled. “All the time with just my right foot down… and today was good! I was expecting the two G-Force Protos to catch me really quickly, but actually they were a bit late! First it was Gadasin to go by but he went a little off the route and I took the straight way and got in front again and then Vasiliev caught up and we were all running together. Playing with the Protos was great. But then Gadasin got a puncture and the other one was a little off the middle line and flew off a dune, and I mean flew! But he broke the front of his car when he landed and from then on we just went to the finish. It was a very nice day!” 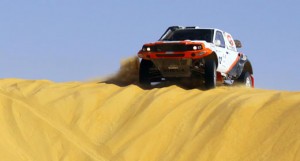 And what about G-Force. “Just some more bad luck like every day,” Boris shrugged disconsolately as it wasn’t just a puncture that slowed him down, today he really lost his cool… literally… as his cool-suit sprang a leak… and Freon gas is rather hard to find in the middle of the desert. But it was his car that was showing the effects of the day rather than him as it was listing sadly to the side. “There are lines of these small little dunes,” he said. “They’re only about 60cm high, but are really hard to see… and we hit one fast. It’s like driving into a small wall at 150km/h and the impact broke a suspension strut…” And Vasiliev? Again Boris sighed. “He landed really hard and awkwardly on one wheel after a jump and broke the
front suspension assembly. The right side today, yesterday it was the left!” And the truck? “Sergei (Kislev) and Alexi (Ivanov) were up all night fixing the hydraulic clutch and making new engine mounts, but at the moment they are still in the stage and we don’t have contact with them…”

5th today and 4th overall is Vadym Nesterchuk in the Sixt Ukraine Mitsibishi, but it was far from easy. “We lost the power steering fluid so it was so hard to drive the car,” he said. To keep going we had to improvise by filling the tank with engine oil instead… but it didn’t last so long. But we made it, and now we are getting ready for tomorrow.” 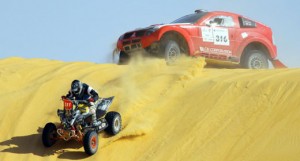 Coming home 3rd today was the cheerful and friendly Costel Casuneau, who I again found stretched out on his mattress in the shade. “Today was fast,” he said, “And we spent a lot of time on the limiter at 160kp/h. But we almost crashed again… this time into Vasiliev because our Sentinel didn’t work. We saw a couple of guys in racing suits sitting on top of a dune and so moved a little to the side just in case… and if we hadn’t… well…” The Mitsubishi’s mechanics were as relaxed as Costel and seemed to be sleeping under the car. “No,” he smiled. “They are just checking the carbon-ceramic clutch for tomorrow. It’s very sensitive and if you are rough with it, you can burn it out in a minute… but we’ll take the dunes easily as at this stage in the race it’s more important to finish.”

Another team dreaming about finishing are the Egyptian Rahhala team. We waited a while at our vantage point in the dunes but they didn’t appear. “The turbine for the engine air-cooling system failed,”  Tarek El Erian explained in the bivouac. “We tried to carry on a bit further, but no! It’s a pity as we were going nice and steady, no one was overtaking us and the stage was actually quite easy, apart from the speed of it, so we are a little sad not to finish. But everything is fixed and we’ll be at the start tomorrow!”

And quite a few had something to say about tomorrow’s stage. I overheard people in the press centre calling it the Big One. At’s 444km it’s the longest, hardest and most specific of the event, full of intricate dunes with changing sands where experience will pay… 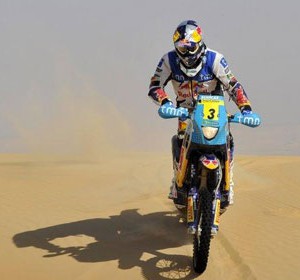 The 4th stage of Pharaons Rally should be called “Farafra´s Circuit.” The timed section, a 339 km was loop was mostly...
Copyright 2011-2016 Rallyraid.net - RISE Network. All Right Reserved.
Back to top