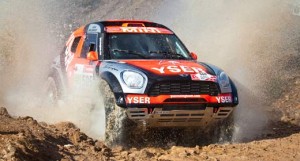 After the two punctures in the morning stage of the second day of the Baja Vodafone Portalegre 500, Filipe Campos took off in the afternoon for a dream driving show, crowned with a fifth win at the event organized by ACP, beating Helder Oliveira by 2m41s and Miguel Barbosa for 2m53s. With this result Campos becomes the new wins record holder in the most mythical Portuguese cross country race.

Competition well tried to resist to the Mini’s recuperation, but Helder Oliveira and Miguel Barbosa had to surrender to the pace imposed by Campos, and concentrate on the fight for second place, in a battle where the Nissan driver ended up getting the better by a mere 12 seconds. The Russian drivers sank at the last special: Novitskiy finished only fifth and Gadasin sixth. Pedro Grancha was also in good pace, signing the fourth time on the stage, in front of Ricardo Leal dos Santos, which allowed him to minimize the time lost on the other stage and jump to the final seventh place, while the Mini driver finished fourth place overall. 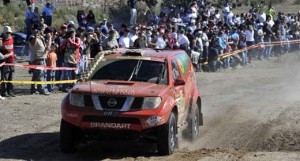 After the problems in the second stage, Filipe Campos recognizes that he started the third one “with a little bit of anger and completely flat out. I wanted very much to win this race and I gave everything until the last kilometer. I was always on the limit. The car is fantastic and although not completely to my preference, this afternoon the level of braking and suspension was already quite better. This event was again an example of organization and the track was very good, although there were still areas with some mud “, declared at the end the winner of the silver anniversary of Baja Vodafone Portalegre 500. 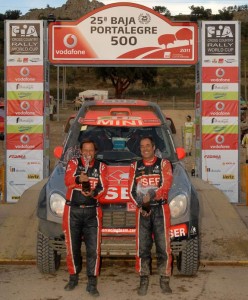 But if Campos was satisfied, also glad was Helder Oliveira. “Everything went very well. I had only two new tires to replace in the afternoon, and after 40 or 50 kilometers the traction was already missing. It was my best result at Portalegre, not expected at all, although after what happened this morning I have still believed that I could win, but Filipe was superb and his car is from another level. At the end I had to attack a little to overcome Miguel in the classification”.

Resigned was Miguel Barbosa. Despite having done a race where “everything went well, but it was impossible to do better. In slower areas I still can win some seconds, but then in the quick parts I have no chance. We managed to reach the podium, but not in the position that we would like. We add the maximum score for the Championship and we kept the fullness of the objectives that we had for this year”, concluded the Portuguese cross country champion.

As for the Russian drivers, that led at the end of the morning, they had a last stage to forget. Leonid Novitskiy had a puncture, while Boris Gadasin was always wasting time for the fastest, finishing in sixth place, 13 minutes to the winner, while the Mini driver closed the “top five”, 8m28s behind the winner, confirming his win in the FIA Cross Country Rally World Cup. 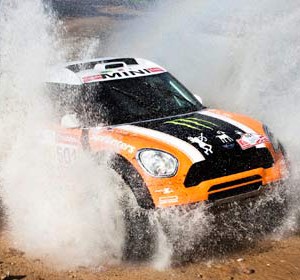 Portugal’s Baja Portalegre, the final round of the 2011 FIA World Cup for Cross-Country Rallies, was a successful one for the X-raid...
Copyright 2011-2016 Rallyraid.net - RISE Network. All Right Reserved.
Back to top