With the sets of some big sceen masterpieces in the background, the OiLibya Rally of Morocco became an epilogue in Cinemascope, in the region of Ouarzazate. The program for this final stage: a loop, three times for bikers and twice for both cars and trucks, of 57 km. A guaranteed Extravaganza with all of the caravan and guests who joined us today for the final after six days of racing … it was intense.

Making the engine roar of his Yamaha 450 No. 1 at the start this morning, Helder Rodrigues showed his determination to pin a second victory this season after his coronation in May in Tunisia. Mission accomplished for the Lisboan biker, already decorated with the world title … If he could still fear a possible return of Jakub Przygonski (KTM 450 No. 2) the Portuguese driver emerged, in the end, as a victor relegating the hopes of the Polish Orlen team. 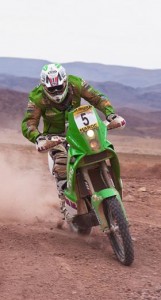 Winner of this final stage and third overall, Pal Anders Ullevalseter (KTM 450 No. 5) climbs on the podium in the third place. The Norwegian collects the fruits of a wise and measured pace throughout the rally, regularity does pay … The tall blond on the green bike is ahead of the Dutchmen Frans Verhoeven (Sherco 450 No. 4), fourth position overall and Henk Knuiman (KTM 450 No. 16), firth.

Seventh, but beaming with pride when crossing the finish line, Harite Gabari (Yamaha 450 No. 14) signed his best result in three appearances on the OiLibya Rally of Morocco. The pilot of Agadir, suffered several falls on Thursday and Friday, winning thanks to perseverance and courage …

Marc Coma (KTM 450 No. 3) turned the rally into a test session for the Dakar, having lost any chance of a win on the first day of the race, because of mechanical problems. Just behind him in 11th position: Joel Vidal (KTM 257) literally living the dream. He is a French amateur biker and pocketed the category reserved for Enduro Cup series bikes, just ahead of his compatriot Eric Shiano (Sherco 450 No. 251), after an impressive final sprint, beautiful but …in vain. 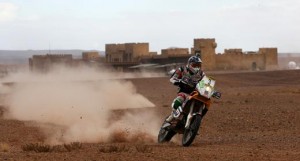 Bad news however for the young Spaniard Joan Barreda (Husqvarna 450 No. 12) and for the Frenchman Sylvain White (Yamaha 450 No. 20), both victims of falls in this last race.

Champagne and shouts of joy awaited the arrival to Dmitry Pavlov (Honda 450 No. 264), waving the Russian flag to sign a beautiful victory in the quad category, in Enduro Cup, and this just six months after his victory in Tunisia! The podium comes mailly from as inseparable it’s the Bulgarian Petar Cenkov (Can-Am No. 200) and Mladen Vachkov (Can Am-202) who make it to the second and third places. 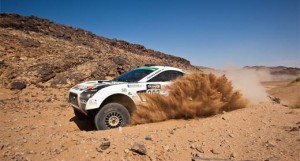 Winner of four stages out of six and leader of the OiLibya Rally of Morocco from one end to another, the Dutchman Bernhard Ten Brinke (Mitsubishi Racing Lancer No. 305) has been the great revelation of this extraordinary week in the great southern Morocco desert. Completely new to rally, just two years after its debut in competition on a Ford Focus WRC championship in Belgium and the Netherlands he signs a resounding success as the unexpected winner. First victory rally also for his French navigator, Mathieu Baumel, whose advice and experience were of great help to the driver of Team Wevers Sport. First win in competition also for Mitsubishi Racing Lancer, built by the Japanese before their retirement from competition two years ago …

Second, after one quite exemplary week, the MD Rallye Sport Buggy No. 309 of Regis Delahaye and Eugenie Decré, they sign here also their best performance in five years. The French team are ahead of the Chilean Boris Garafulic and Frenchman Gilles Picard (BMW X3 No. 304),who also surprised guests in the third place of the OiLibya Rally of Morocco, the last survivors of the X-Raid armada.

In the T2 category, reserved for vehicles close to the series, it is ultimately Gerard Mognier and Jean-François Vautier (Toyota No. 336in front of the Spanish duo Foj / Cervantes (Toyota No. 329) and the French Genovini/Chahinian (Toyota No. 332). 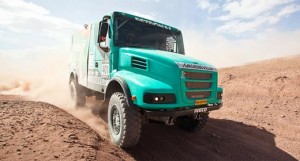 Fourth in the scratch and and fifth overall car / truck combined, absolutely extraordinary: Miki Biasion and his IVECO No. 402 of the De Rooy team have really impressed everyone at the OiLibya Rally of Morocco. The double world rally champion, just ahead of his teammate, Dutchman Gerard De Rooy (IVECO No. 401),who finished sixth after missing a way point in the penultimate stage. Hats off also to Elisabete Jacinto (MAN No. 400), climbing to the third step of the podium after a beautiful week of racing at the wheel of his series, truck much heavier and less powerful than the prototypes of the prestigious Dutch team. 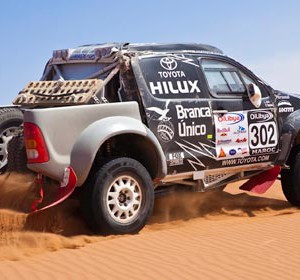 Nicknamed 'Sand Rodeo' the fourth leg of the OiLibya Rally of Morocco kept all its promises. Because even if competitors...
Copyright 2011-2016 Rallyraid.net - RISE Network. All Right Reserved.
Back to top