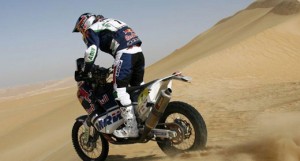 Marc Coma celebrates his 35th birthday today, and he offers himself a stage victory as a present! The Spaniard signs the third victory out of five stages. In cars, Jean-Louis Schlesser doesn´t stop attacking and increases the gap from the top…

Today was the most difficult stage of Pharaons Rally 2011. All competitors agreed that the extreme hit was a steady difficulty during the 444 km of the timed section. The first five bikes of overall standings run together for part of the stage as if they needed to spy one over the other! Certainly the battle starts with the two Yamaha riders, Jordi Viladoms and Helder Rodrigues (fifth of the day), both wanting to take the place after Coma, who has 14´53” of advantage. Chaleco López on Aprilia and Jakub Przygonski on KTM joined the crew and the five together rode at a very high pace. 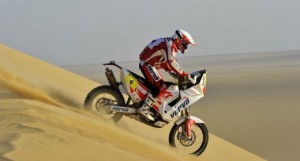 Marek Dawroski (KTM) finishes 6th and didn´t participate of bunch. The Polish is in front of Italian rider Andrea Mancini (Honda) and Jes Munk (KTM). Then, the first French, Edouard Boulanger (Aprilia) is particularly regular. In the overall standings, behind Marc Coma, Jordi Viladoms opened the gap from Helder Rodrigues for less than six minutes. The two Yahama riders must control each other during the last stage, keeping an eye on Jakub Przygonski.

Marc Coma (KTM): “It was a hard day, especially for the 15 km of soft sand, very technical. Not to risk to run out of gas, I didn´t go so fast before the refueling area. Then, I restarted and attacked… full gas! Just small sand stuck in the first dunes, but I had the time to analyse the situation and find back a nice pace.”

Jordi Viladoms (Yamaha): “It was a hard stage. We rolled all five together (Coma, Rodrigues, Przygonski, Lopez) after CP1, and found a nice rhythm. It was nice to ride together because it allows you to control your adversaries, and I took 6 minutes over Helder, which makes me take the second place overall. There is still one day to go so I have to keep it… but a place in the podium wouldn´t be bad!”

Helder Rodrígues (Yamaha 450) : “I opened the track for about 240 km. Marc Coma and Jakub Przygonski were behind, but we got all together (with Jordi Viladoms and Chaleco López) at CP1. After, Chaleco took me over and at that moment I preferred to take care of the bike because there is one more stage to go! And today´s stage wasn´t easy…”

Marek Dabrowski (KTM) : “It was a typical African stage with specific difficulties during each part of the ground. There were lots of bumps like in endure to be handled carefully, and also lots of sand during the second part of the stage and sometimes very very soft. I completed the stage at my own pace and in my position.”

Jakub Przygonski (KTM): “The special was beautiful but long. I rode well at the beginning and fast at the refueling area, I was second, after marc. In the dunes, Marc made a small mistake and I found myself opening… It didn´t last long because I got stuck too and my engine stopped. It took me sometime to restart… I got back to the peloton and we crossed the finish line almost together.”

Francisco “Chaleco” López (Aprilia 450): “I had a good time today! It felt like the stage was short, and it was great for me because I was able to ride with Jordi (Viladoms), Helder (Rodriguez) and Marc (Coma). This makes me feel a lot better because until now I was always riding behind… and now I see how much effort it takes to run a long stage among top riders.”

Lilian Lanceleeve (Quad): “It was such a nice stage, but so long too! We arrived in the dunes at 2 p.m. and the sand was soft. Schlesser took me over and he left deep trace as he drove so I avoided running into it. I am not sure that quads will arrive early because it was an extenuating stage.” 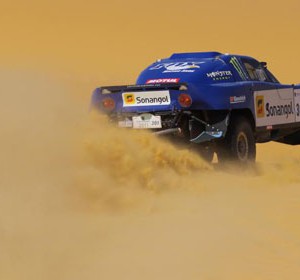 It's no metaphor, we really were riding on a sea of sand. Saeed Al Hameli pressed his nose up against the windscreen to get the best...
Copyright 2011-2016 Rallyraid.net - RISE Network. All Right Reserved.
Back to top