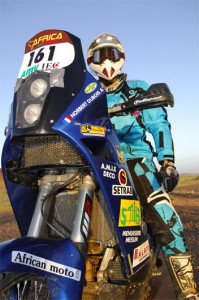 This fourth edition of the Africa Eco Race promises to be exciting on two or four wheels. A few weeks before the start, trying to imagine the final podium in Dakar, on the 8th of January, seems to be a difficult exercise. Everyone will have a chance to put his name on the 2012 top ranking as the balance between competitors is real.

On two wheels, the challengers are numerous. Between 450cc and “big cylinders”, difficult to know which rider will be the more efficient. Each of these categories has its own advantages and the clue will be to exploit the full potential of these machines to win.  Riding in the + 450 cc category, Oscar Polli and Norbert Dubois will probably offer a fierce fight. The highly experienced Italian rider is delighted to return to Africa for a major event. Its goal: to see the beach of Dakar and if possible, in a great position! Norbert Dubois, second of the Africa Eco Race 2011, will celebrate its 20th participation in a rally raid. A birthday that he would love to celebrate on top of the podium. In the 450cc category, the fight promises to be very open and we will have to wait the end of the first stage to establish any hierarchy. Experienced riders or beginners, all of them are ready to fight. 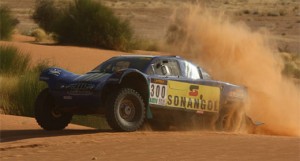 Among the cars, although the triple winner of the event, Jean-Louis Schlesser, will again be part of the race, the driver-manufacturer will have to face a real armada of two-wheel drive cars, especially with the high level Team Henrard. The Belgian team has already announced his intentions with the two Tarek buggies, driven by Yves Fromont and Patrick Martin while Stephane Henrard (2nd in 2011) will drive his “latest baby » fresh out of his workshops. Stephane will drive a « light » buggy with relatively low operating costs. A car he wishes to market in the future.

In the 4×4 category, Jacky Loomans promises to be the favorite on his new Toyota. In this category, competition is not an empty word. On their Toyotas, Mitsubishis, Nissans and Bowlers, crews are very experienced. Just like previous years, we note a strong contingent of vehicles “made in England” of different types as Desert Warrior, Nemesis or Wildcat. For the first time, the SSVs will be part of the race.

Perhaps the most impressive category on track, the trucks, will propose once again high emotions. Tomas Tomecek, 2011 winner, on his Tatra will be more combative than ever to compete.  Second of the previous edition, the Portuguese Elisabete Jacinto (MAN) is looking for her revenge. Elisabete is already looking forward to face her main opponents.  Noël Essers (MAN) and Patrick Hillewaere (MAN) will certainly not miss the opportunity to be the best challengers just like Michel Salvatore who will drive his brand new Scania. 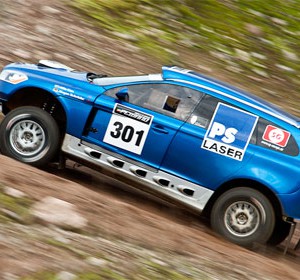