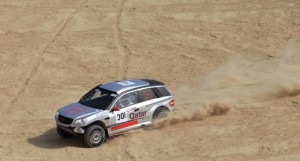 Nasser Saleh Al-Attiyah, Adel Hussein Abdullah and Justin Taylor won their respective categories in a dramatic Qatar International Baja, where navigational mistakes by numerous competitors made the challenge that much more difficult in inclement weather conditions, in the southern deserts of Qatar on Saturday.

Organised by the Qatar Motor & Motorcycle Federation (QMMF) as a candidate for inclusion in the 2012 FIA World Cup for Cross-Country Rallies, the event lived up to its daunting reputation and even experienced international riders and drivers found it difficult to adhere to the demanding off-road routes through the remotest areas of southern Qatar.

Navigational errors and heavy penalties were commonplace, but local hero Al-Attiyah and Spanish co-driver Lucas Cruz Senra began a new partnership together with an emphatic victory in the cars’ category in a SAM-built Mercedes 35 CC supplied by Germany’s Sven Knorr.

“I was pleasantly surprised with the performance of the Mercedes,” admitted a delighted Al-Attiyah, as heavy rain fell at the rally finish. “With a little more power it will be a competitive force, for sure. The route was very difficult and quite technical in places. It was more like a cross-country rally than a Baja and I think, for the future, there should be more instructions and more caps in the road book, especially to give more support to the amateur teams.” 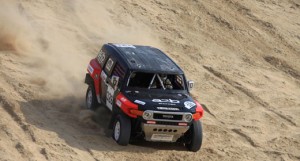 Dubai-based Briton David Mabbs and his French co-driver Xavier Caminada were delighted to finish a surprise second in their Toyota FJ Cruiser and the UAE’s Obaid Ali Hassan and Dodi Ali Hassan were third in a Nissan Patrol.

Qatar’s Adel Hussein Abdullah controlled proceedings in the quad category, once Australia’s Dennis Nikitopoulos suffered transmission woes and Emirati Obaid Al-Kitbi was badly delayed with navigational trouble. The vast majority of the field incurred time penalties for route deviations during the course of the day and Adel Hussein eventually found himself at the top of the entire motorcycle/quad leader board.

“I had a strategy and it worked for me today,” said an ecstatic Hussein. “I pushed in places and I am so happy to take this win.”

Dubai-based Briton Sunderland overcame his own navigational torment to emerge as the initial winner of the motorcycle category and the 450cc class on his Honda, with the UAE’s Mohammed Al-Balooshi shadowing him to the finish on a KTM. But a myriad of time penalties were imposed on several riders and Australia’s Justin Taylor, who had survived a puncture and his own share of problems, emerged as the winner of the two-wheel category, as a fierce thunderstorm delayed the podium finish in the desert. 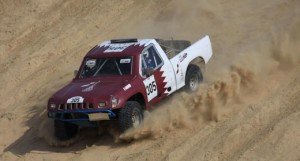 The entire field of 19 cars, 10 motorcycles and three quads were able to make the start of what promised to be a punishing 243.68km of the Al-Kharara stage through the remotest deserts of southern Qatar.

Sam Sunderland and Al-Balooshi rode together at the front of the field through the early kilometres, but Rico Langer, Obaid Al-Kitbi, Ibrahim Bugla and Tonya Colson all missed a vital junction, headed down the wrong track and ended up well south of the actual route.

Numerous competitors found the navigation tricky, with Mark Powell following Colson down a wrong track and Al-Kitbi making it down as far as south as the Inland Sea before turning back and retracing his tracks.

Langer managed to reach the refuelling point before virtual stage leaders, Al-Balooshi and Qatar’s Nasser Hassan Al-Rabaan. Sunderland made a navigational error himself and trailed behind the leading riders, as Adel Hussein led the quads and Al-Attiyah was the best of the car runners from Suhail bin Khalifa and Nabil Al-Shamsi and managed to pass all of the bikes before the refuelling point.

Turkey’s Kaan Bilgen, Australia’s Dennis Nikitopoulos and the UAE’s Salem Al-Harthy failed to complete the stage and returned to the main overnight service point, while Saudi Arabia’s Farhan Ghaleb was badly delayed in his Nissan shortly after the start with mechanical issues.

Both bin Khalifa and Al-Shamsi joined Sunderland in taking several wrong turns before refuelling and that enabled Majed Al-Shammeri and Obaid Ali Hassan to close in on a virtual second place in the car category, as light rain began to fall across parts of the route. Al-Shamsi suffered mechanical problems soon after regaining the correct track.

Defending Dakar champion Al-Attiyah continued to head off into the distance, as Sunderland regained the track and began to regain some of the time he had lost to his motorcycle rivals during the morning. Langer had been the first rider to reach the refuelling point after his earlier navigational mistake but the German became hopelessly lost again after refuelling.

A beneficial navigational mistake meant that Al-Maktoum unofficially reached the stage finish 3m 07.5s in front of Al-Attiyah and, for all his morning drama, Sunderland managed to find his way passed Al-Balooshi, Langer and Al-Rabaan and hit the front of the motorcycle category, as Colson lost her way again near a tiny village and heavy rain began to fall on parts of the stage.  Sunderland duly arrived at the stage finish well clear of Balooshi and Langer, but it would have to be seen how penalties were imposed on competitors later. Gutsy Tonya Colson completed the opening stage shortly before dusk after a gruelling day in the desert.

Both Al-Attiyah and Al-Maktoum were duly penalised for route deviations and the stage win was handed to Qatar’s Mohammed Al-Mannai, with Al-Attiyah slipping to second with a 1h 10m penalty and Al-Maktoum being given four hours and plummeting down the leader board.

Al-Maktoum duly began the third and final 102.82km stage in front of Al-Attiyah and, predictably, Al-Attiyah passed his rival before they both made a similar navigational mistake and began to head north in error, before turning south towards a loop towards the Inland Sea.

Sunderland headed Balooshi and Langer into the final motorcycle section, with Adel Hussein ahead in the quads and the pair remained well out in front of their rivals until they reached the Inland Sea. Neither rider was confident of taking the correct route and errors were made, with Balooshi forfeiting the correct track to follow Sunderland down an incorrect trail.

Al-Attiyah and Al-Maktoum completed the remainder of the section without problems, with the Qatari taking the fastest time and sealing the overall victory – his third in as many Qatar Bajas. Time penalties had already sealed Al-Maktoum’s fate and lifted the UAE’s Obaid Al-Hassan into third behind David Mabbs.

Sunderland reached the finish first to seal a potential victory in the motorcycle category, with Balooshi following him over the line. The results eventually depended upon the amount of route deviations that certain competitors had made during the day and Sunderland was declared the winner. But this was later overturned and the penalty-less Adel Abdullah was handed victory on his quad, with Taylor taking second position and Balooshi finishing third. A disappointed Sunderland slipped to fourth. 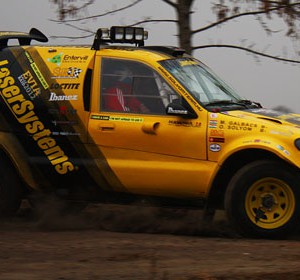 Sólyom Team is through a long weekend of testing. The arriving of winter brought 4,5 degrees and murky weather. The HAWKIA...
Copyright 2011-2016 Rallyraid.net - RISE Network. All Right Reserved.
Back to top