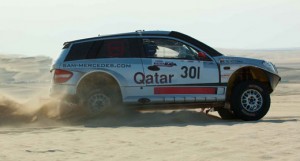 Al-Attiyah teamed up with the 2010 Dakar Rally-winning co-driver Lucas Cruz Senra to set the fastest time of 3m 55s in the Mercedes 35 CC that he is testing as part of a development programme with the German company SAM.  Eighteen cars, 10 motorcycles and three quads were flagged away from the official start podium by QMMF president Nasser Khalifa Al-Attiyah in the presence of Carlos Barbosa, the FIA’s vice-president for mobility and president of Automóvel Club de Portugal. 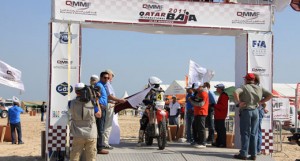 Dubai-based British rider Sam Sunderland is playing down his chances of winning the motorcycle category at the Qatar International Baja, but he was in sensational form on the opening special stage and built up a massive 55.5s lead over his 450cc class rivals and a 45.3s overall advantage. The young protégé has already taken stage wins in the Abu Dhabi Desert Challenge and the Australian Safari, but is being modest to the end.  “I don’t want to appear arrogant but, yes, I do feel confident that I can win the Baja on Saturday. The terrain will be different, for sure, but I am looking forward to it,” said Sunderland, who has entered next January’s Dakar Rally in South America as part of Team Honda Europe. “The Baja will give me another opportunity to ride over rocky terrain before the Dakar.” His time on the opening stage was even faster than the one set by Al-Attiyah in the Mercedes.

The UAE’s Mohammed Balooshi is planning to become the first Arab rider to enter the Dakar and started his Baja campaign well by setting the fastest time on his KTM in the Open class and the second quickest time of all the motorcycles. Qatar’s Adel Hussein Abdullah held a five-second advantage over the UAE’s Obaid Al-Kitbi in the Quad category, with Australia’s Dennis Nikitopoulos holding third place. Qatar’s Meshaal Al-Emadi is used to enduro riding and adapted well to his first taste of the Baja. He was classified in fourth place in the 450cc class after the opening stage. 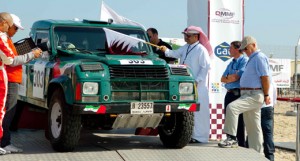 Dubai’s Sheikh Suhail bin Khalifa Al-Maktoum won the Qatar International Rally back in 1994 in a Toyota Celica 4WD and is taking part in the Baja with a Land Rover 110.  He held second overall after the opening stage and trails Al-Attiyah by 28.7s. “It’s nice to be back in Qatar competing,” said Sheikh Suhail. “One thing I remember over the years here is rock! The terrain is so different to the sandy areas of the UAE and it is so important to watch your step. Tomorrow could be interesting!” The UAE’s Nabil Al-Shamsi finished the special in third place in a Nissan Patrol, with England’s Mark Powell in fourth and Qatar’s Mohammed Al-Mannai in fifth. Eighteen cars actually started the stage, but Ian Barker lost a lot of time on the track in his Nissan Patrol. The UAE’s Mansoor Al-Helai is aiming to follow in his father Yayha’s footsteps as ‘King of the Dunes’ in his Nissan Patrol entered in the car category. “My father built up a good reputation as a fast desert driver and I hope that he has passed much of that experience on to me,” said Al-Helai, who held 12th overall in the car section after SS1.

Tomorrow (Saturday), there will be two special stages, starting with the 243.68km Al-Kharara section at 08.25hrs and finishing with the 102.32km Khor Al-Odaid section – first car due at 13.15hrs. The finishing ceremony will take place from 15.30hrs. 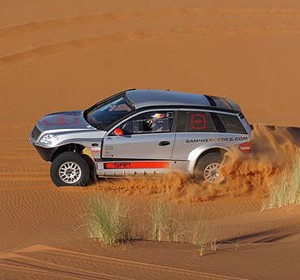 The 2011 Qatar International Baja gets underway at the Sealine Beach Resort, south of Doha, on Friday morning. A bumper entry...
Copyright 2011-2016 Rallyraid.net - RISE Network. All Right Reserved.
Back to top