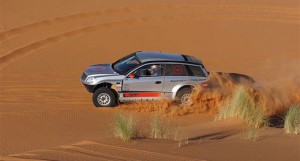 Qatar’s Nasser Saleh Al-Attiyah will take part in the new Qatar International Baja, being run by the Qatar Motor and Motorcycle Federation (QMMF) as a candidate event for inclusion in the FIA World Cup for Cross-Country Rallies, on November 24th-26th.

The Doha-based jet-setting rally star has confirmed his participation in the exciting event at the wheel of a SAM Mercedes 35 CC. The multiple regional rally champion won the event in 2004 and 2005 and will be out to make it a hat-trick of victories on his local cross-country event.

“This is an event which is special to me and one I always enjoy taking part in,” said Al-Attiyah. “We are a small country, but we have some diverse and fantastic desert terrain in Qatar. The staging of the Baja means we are able to show people around the world what Qatar has to offer for cross-country motor sport.”

Al-Attiyah teamed up with French co-driver Didier Le Gal to crush the opposition in a Chevrolet Pro Truck in 2004 and repeated the feat with co-driver Alain Guehennec in a BMW X5 the following year, before the event was withdrawn by the QMMF to avoid a clash with the Asian Games being staged in Doha. 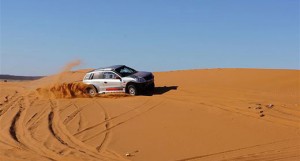 Built by Sächsische Automobil Manufaktur (SAM) in Germany, Al-Attiyah’s new 35 CC is powered by a six-cylinder, 3.5-litre Mercedes Sportmotor V6 engine and develops a substantial 350Nm of torque in a tractable rev range.

It uses a six-speed Sadev sequential transmission, Sadev differentials and Reiger suspension. SAM was founded by Sven Knorr in 2009 and is working in close association with evolving FIA regulations governing cross-country rallying.

Al-Attiyah is the top seed in the car category, which includes 20 drivers from six countries – Qatar, UAE, Saudi Arabia, England, Ukraine and Kuwait. There are 21 riders from nine nations and two quad riders on the provisional starting list for the competitive motorcycle category, which will run on an event managed by clerk of the course Iain Black. Elie Semaan is the clerk of the course of the car category.

“We are delighted to have attracted so many international competitors to our new candidate Baja,” enthused Nasser Khalifa Al-Attiyah, president of the QMMF. “Our team has laid on a challenging route through the desert and this should test drivers and riders to the full.

Administration checks and scrutineering will take place at the QMMF in Doha on Wednesday, November 23rd and Thursday, November 24th respectively, while the ceremonial start (13.00hrs) and opening 6.5km super special stage (14.00hrs) get proceedings underway at the Sealine Resort on Friday, November 25th.

Leg two consists of two special stages, starting with the 242km Al-Kharara section at 09.00hrs on Saturday morning and finishing with the 100km Khor Al-Odaid section at 12.45hrs after a mandatory break of 30 minutes. Thefinish ramp will take place adjacent to the parc ferme area at 15.00hrs. 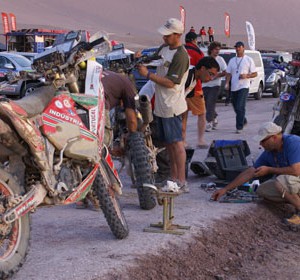 Last weekend was a studious one for some of the South American competitors, who came to Buenos Aires to take advantage of the all the advice...
Copyright 2011-2016 Rallyraid.net - RISE Network. All Right Reserved.
Back to top