Alongside Stéphane Peterhansel, Giniel De Villiers has been the most consistently high-performing driver over the last ten years. After driving for the Nissan and Volkswagen teams, this year he joined forces with Toyota. 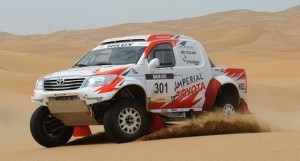 Behind the scenes of the major teams, speculation has already started concerning the main contenders’ chances of winning the next Dakar rally. In his accustomed way, Giniel De Villiers moves discreetly, but his confidence and experience make him one of the favourites in the race to the finishing line. Since first competing in the Dakar, the South African driver has only once failed to make the Top 10 and came 2nd last year. The withdrawal of the Race Touaregs, which got the upper hand in the last three editions, has reignited the debate surrounding this category. In this context, the 2009 winner jumped on board the ambitious project developed by Toyota, which joined forces with the Overdrive team to provide an already highly competitive prototype for the Dakar 2012: “It’s very exciting, as the car has great potential. Toyota really has chosen the best time to get involved in the event. We tested the car in Namibia and collected a lot of information after the Morocco rally, which featured one of the cars. We are not yet on a level with Volkswagen, but are not far off it,” explains Giniel.

Ever cautious, the Imperial Toyota team’s new driver has set himself modest objectives for the launch of this vehicle: “This is a new challenge and a new chapter for me. I believe we really have a chance of making it to the podium. But you never know what to expect with the Dakar”. On the route, De Villiers will be able to count on the support of a fully-fledged teammate. Argentinian Lucio Alvarez, who tried his chances driving his quad in 2010, found his way last year when he finished 15th in a car. The Toyota that he will have the responsibility of driving to Lima could take him even higher. And it’s being whispered that a third pick-up is waiting in the Overdrive workshops, in anticipation of an imminent response from another team that may well cause a stir. Watch this space!

A coast to coast Dakar 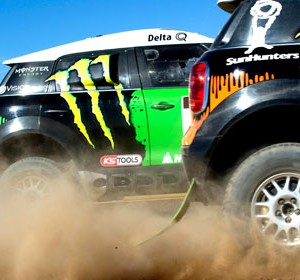 Team X-raid will field a record line-up in 2012 Dakar which will lead from Argentina through Chile to Peru. A total of eight...
Copyright 2011-2016 Rallyraid.net - RISE Network. All Right Reserved.
Back to top