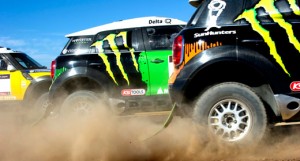 Team X-raid will field a record line-up in 2012 Dakar which will lead from Argentina through Chile to Peru. A total of eight vehicles entered by the German squad – five MINIs All4 Racing and three BMWs X3CC – will compete in the legendary event that will be started in Mar del Plata, Argentina. And with Stéphane Peterhansel (FRA)/Jean-Paul Cottret (FRA), Nani Roma (ESP)/Michel Perin (FRA) and Krzysztof Holowczyc (POL)/Jean Marc Fortin (BEL), the X-raid line-up features at least three driver pairings that have got what it takes to win the Dakar, with their MINI All4 Racing. 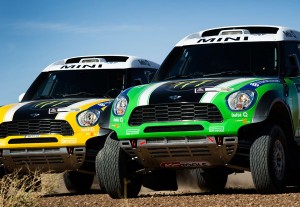 Team X-raid is going to turn the desert into a colourful place, in January, with the five MINI All4 Racing contesting the 2012 Dakar in different, striking liveries: Stéphane Peterhansel und Jean-Paul Cottret have set themselves the goal to battle it out at the very front end of the field, with their green ‘Monster Energy MINI All4 Racing’. The nine-time Dakar winner is fiercely determined to celebrate his 10th Dakar triumph and cross the finish line in Lima, Peru, as the 2012 Dakar winner.

Their team-mate Nani Roma will attack together with his co-pilot Michel Périn in a yellow ‘Monster Energy MINI All4 Racing’. The Spaniard already has celebrated a motorbike win in the Dakar and now wants to polish up his CV by adding a Dakar win or a podium place on four wheels to his record. With Krzysztof Holowczyc and Jean-Marc Fortin, racing an ORLEN MINI All4 Racing in the livery of the Pole’s main sponsor, there is a third competitive pairing representing X-raid. With boosted self-confidence following their wins in the 2011 Silk Way Rally and the 2011 Baja Poland, they certainly also want to become a factor in the fight for the overall win. 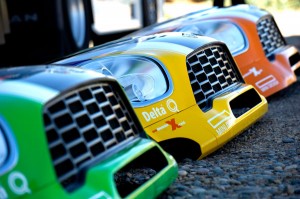 Meanwhile, Leonid Novitskiy will race – together with his German navigator Andi Schulz – the orange Monster Energy MINI All4 Racing and is keen on demonstrating the experience he gathered as two-time FIA World Cup winner. While Ricardo Leal dos Santos and Paulo Fiuza will contest the Dakar with the red Monster Energy MINI All4 Racing. Dos Santos has got many years of Dakar experience under his belt and could make it to the top 10 again as last year.

Boris Garafulic and Gilles Picard are one of the three X-raid pairings competing in the Dakar with a BMW X3CC, in their case with the Vision Advisors BMW X3CC. It’s the second Dakar appearance of the Chilean. Alexander Mironenko and Sergey Lebedev will join the Dakar adventure in the cockpit of the BUER BMW X3CC. The two Russians also contested the Silk Way Rally and the Baja Poland for the Trebur based squad. While Stephan Schott und Holm Schmidt – who already drove the 2011 Dakar for Team X-raid – will race the KS TOOLS BMW X3CC. They want to make it to the top 15.

“We have got a truly competitive line-up and are very well prepared for the 2012 Dakar” said X-raid team Manager Sven Quandt. “Stéphane Peterhansel most definitely represents our spearhead but the other four MINI All4 Racing also are raced by extremely competitive drivers. The motor-racing enthusiasts certainly will witness a fierce fight for the win but I’m convinced that they also will be thrilled by our colorful fleet. It will be a difficult Dakar and the competition which will benefit from the modification of the regulations should not be underestimated, especially the Toyotas and Mitsubishis.”

On 1st January, 2012, in Mar del Plata, Argentina, the Dakar Rally officially starts into its first stage. Meanwhile, the fans and spectators have the chance of seeing the cars for the first time on New Year’s Eve when they are rolling over the podium on the city’s central square. From the Argentinean holiday resort, the event takes the competitors over the Andes to Chile. Copiapo, well-known due to the spectacular rescue of the miners in 2010, will be the venue of the day of rest, scheduled for 08th January. Afterwards, the competitors start into the second half of the rally – to the finish in Peru’s capital Lima. 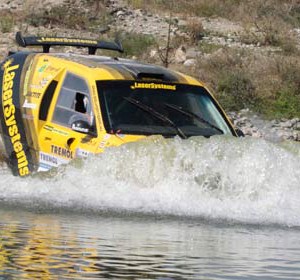 The next rally for Sólyom Team will be Athens 24h on 26-27th November, a 24 hour long cross-country rally event near Athens....
Copyright 2011-2016 Rallyraid.net - RISE Network. All Right Reserved.
Back to top