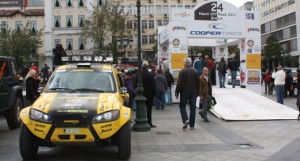 Sólyom Team is through a race lacking luck and full of mechanical failures. Problems started just outside the sunny Athens. All of a sudden, one of HAWKIA’s transformers broke down on a crowded highway at high speed and two cylinders of the engine stopped immediately. The crew Sólyom – Galbács almost collided with three other cars but with great difficulties they were able to reach the hard shoulder. Later at a forest part some thick branches hanging down broke the lighting and some parts of the car and then the two fuel feeder systems broke down one after each other. Finally the breaking off of the rear left wheel put an end to the rally.

Many motorsport fans arrived to the start ceremony held in the downtown of Athens and admired the racing vehicles. The yellow-black race car of Sólyom Team left the start podium in ovation but after a mere twenty kilometres it was witnessed in the verge by the vehicles passing by. 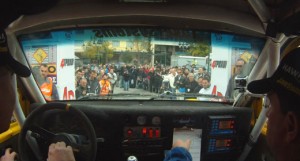 Olivér Sólyom: “HAWKIA gave us an unlucky flip. At 150 km/h we felt as if the car had been grabbed from the back. The car behind us nearly crashed into us and as I tried to move towards the hard shoulder I nearly collided we two more vehicles”

At the first assistance point the problem was solved but because after the crews arriving late from the missed special the crew Sólyom – Galbács wasn’t allowed back to the race for six hours. The crew, huffed because of the long waiting, after the start arrived in a corner with too big speed and slid to the side of the road, too close to the trees of the forest. Four roof lamps, the wing and the car’s right side fell victim to this mistake. Three of the four broken lamps could be changed on the spot and even the broken wing was found.

Mátyás Galbács: “We got a perfect roadbook, all we needed was in it and the distances were right, so we were a bit speedier than enough. Good that we didn’t slide into the abyss. We got away with some time lost due to repairs.” 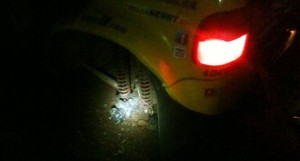 The ‘forced march’ went on until the primary fuel circle stopped. The crew immediately switched to the reserve circle but after some kilometres that also stopped. They immediately dismantled the fuel systems of the HAWKIA and after one and a half hours of struggling finally they were able to go on after creating one system out of the original two. Because of the time lost the crew switched to ‘high speed mode’ but rushing on the twisty mountain roads in the night lead to fatal consequences. In one corner they hit a big rock with the rear left wheel, the wheel broke off, overtook the car from the right and rolled down to an abyss. In the dark finding the wheel, the wheel hub and the brake disc wasn’t an easy task, and their reparation and re-mounting also took time. The efforts of the crew Sólyom – Galbács finally proved to be useless as they lost so much time that they were late form the special and couldn’t continue the rally.

Olivér Sólyom: “I was so angry that I shouted my sorrow to an innocent squirrel. I can’t and I don’t want to speak about this series of bad luck, or maximum to my psychologist. Otherwise this Cooper 24h Off Road is a very well organised race. As long as we were racing I enjoyed every moment, I like the rush in the night. The fantastic attitude of the Greek embraced our hearts – as usual. On behalf of the whole team I say thanks to the organisers for their hard work. They put together a very good race so in 2012 we will be back to the tracks near Athens – then maybe with more luck!” 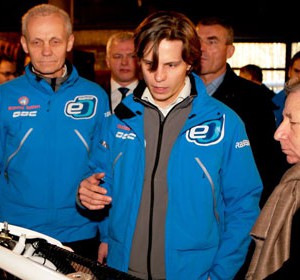 Whilst alternative fuels are often experimented on the Dakar, the project supported by the Latvian government is amongst...
Copyright 2011-2016 Rallyraid.net - RISE Network. All Right Reserved.
Back to top