The relaxed atmosphere adopted by holiday-makers in “La Feliz” did not totally rub off on the riders and drivers of the Dakar 2012, which will start on 1st January. In Mar del Plata, the competitors summoned for the first day of scrutineering proved to be focused on their goal: Lima, which the best amongst them will reach on 15th January. 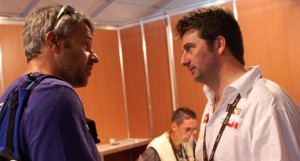 It is not a stage, but a compulsory step on the road towards the race. Among the riders and drivers on the Dakar, the tension was genuinely palpable in the aisles through the various phases of technical and administrative scrutineering. For one or two days, most of them have enjoyed the pleasures of Mar del Plata, the seaside resort popular with holiday-makers from Buenos Aires. However, after tasting a tenderloin or top loin steak according to taste, and a morning jog on the beach for many of them, it was high time to get to the heart of the matter. From dawn onwards, the naval base opened its gates to the riders and drivers. As chance would have it, the first to appear was the youngest competitor on the rally: Argentinean Lucas Bonetto, from Ushuaia, who has just turned 20 years of age. With a promising future ahead of him, the recently-crowned Argentinean quad champion has a ready source of inspiration in the Patronelli brothers, with whom he may have crossed paths later in the day. Alejandro, the title holder, and Marcos, the winner in 2010, have become the leading lights in motorsport in their home country. Their performances along the rally tracks have won them the affection of an entire population, along with the respect of all the riders in the category. The state of play in this category is likely to change with a reduction in engine power included in the rules this year: “I prefer the restrictions”, says Alejandro nonetheless. “Handling a 900cc is harder, more tiring. In any case, this race is not a conventional race. First and foremost it’s a major journey and a massive challenge”.

Aside from the quads, the favourites for the various titles up for grabs are expected a little later in the schedule. However, the first day still enabled the spectators and journalists present to gauge the ambition of some of the outsiders in the bike category, starting with Jordi Viladoms, who has recently left Yamaha for a new Italian team, Bordone-Ferrari. The apparent youth of his team has not made the slightest change to the objectives of the Spaniard, who for a long time was Marc Coma’s water carrier. “There are five of us in with a chance of winning. I think the creation of penalties for changing engines will be a decisive factor. Perhaps some riders will be able to complete the rally with a single engine, but among the favourites, few of them will”. Indeed, the threat of a 15-minute addition in the standings (45’ for the 2nd engine change) was at the heart of discussions. Pal-Anders Ullevalseter, 2nd in 2010 behind Cyril Despres, was more reserved about the capacity to complete 8,300 km without blowing an engine, but does not have any worries about the fight for the podium: “In my opinion, nobody will be able to finish with a single engine, but even with 45 minutes of penalties, it’s still possible to finish near the top of the rankings. In any case, I can’t wait to cross the mountains and get stuck into a good dose of desert”.

The Norwegian’s appetite for sand is shared by all of the competitors, whether beginners, unknowns or favourites. Tomorrow, the pretenders for the title in the truck category will be present: the Kamaz trucks of Nikolaev and Mardeev junior, the Ivecos of De Rooy, Stacey and Biasion and the Tatra of Ales Loprais. In the car category, the stands will be welcoming Christian Lavieille (Dessoude) or Bernhard Ten Brinke (Riwald). On two wheels, it will be the turn of Francisco Lopez (Aprilia), Paulo Gonçalves (Husqvarna) or Quinn Cody (Honda) to undergo the scrutineering circuit. 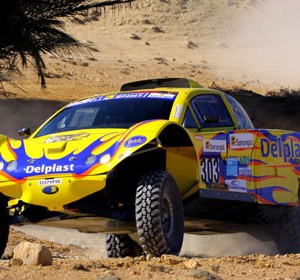