STAGE 1: Wednesday, December 28, 2011
Saint Cyprien (France) – Almeria (Spain)
Free liaison: 1027 km
Competitors will attend a general briefing on Tuesday 27 December, and will then head to the Spanish port of Almeria, where they will embark the ferry, to Nador in Morocco.

STAGE 2: Thursday, December 29, 2011
Nador – Tarda (Morocco)
Liaison: 239.40 km – SS: 276, 90 km – Liaison: 106 km
After leaving the boat in the morning, the competitors have a link of nearly 240 km of public road with a lot of traffic which will be a good exercise in concentration before taking off on the first stage of the 2012 edition of the AFRICA ECO RACE. A timed stge will be a difficult introduction,especially during the first 40 km on a track damaged by recent rains and including subsidence, cracks and numerous diversions. The route then improves to mid-term review. Less demanding in navigation, the second part of the special will be beautiful because the competitors will find a wide and fast track of 40 km which passes through the heart of beautiful scenery. Although this first stage will be the shortest of the rally, it will be still be just a warm-up.

STAGE 3: Friday, December 30, 2011
Soon – Mhamid (Morocco)
Liaison: 8.26 km – SS: 375.14 km
The second stage consists of a short link and then 375 km of special stage, will not pose a particular problem in terms of control, but it will be much more demanding, however,in terms of navigation and. About mid way it will be very important to follow the many changes of caps surface to find a single track in a valley… or lose a lot of time. Despite this, the tracks are generally good but with some tricky parts and a few dunes before arriving at the bivouac.

STAGE 4: Saturday, December 31, 2011
Mhamid – Assa (Morocco)
SS: 414, 14 km – Liaison: 75.90 km
After breakfast, the competitors will go straight to attack the dunes. They will be small but but technical as the route leads through the soft sand and rocks to Erg Chegaga which spans 25 km and are the first real dunes of 2012 AFRICA ECO RACE, where it will be important to get the pressure of the tyres right to avoid loosing time. Later it will be about the power of the engines on the ‘motorway’ that is Lake Iriki, before heading into the rest of the stage that alternates between rocks and sandy areas that require ‘rolling’ techniques… a real rally-rad stage! This will be the longest of teh 5 stages in Morocco, but competitors should finish in time for the New Year celebrations.

STAGE 5: Sunday, 1 January 2012
Assa – As Sakn (Morocco)
Liaison: 10.76 km – SS: 290.23 km – Liaison: 14.75 km
The first half of this special in the south of Morocco is composed of wadis (dry river beds that can be very broken, and will need to be scrambled through and many lakes dry. Around the lake the ground could be soft. Then, the competitors will find some very fast and rocky tracks to the finish in Sakn. A stage in the tradition of Moroccan pistes, however, should not pose too many problems.

STAGE 6: Monday, January 2, 2012
As Sakn – Dakhla (Morocco)
SS: 376.67 km – Liaison: 348.18 km
A stage that René Metge is particularly fond of since it involves a lot of navigation. Co-drivers will have a lot of work to do. First with an off-road track hard to see through the grass, in the heart of a great river. Then, in the desert … the works. Finally, on a small rocky track between the dunes just before the dramatic depression of Wadi Hamra, where, after an impressive descent, it will not be easy to find the right track to get out and pass the CP. From there, the ground will change quickly and then on the fast and rocky tracks the driver will seek to avoid punctures. After the tied section there is a 350km liaison to Dakla on the Atlantic Ocean.

STAGE 7: Tuesday, January 3, 2012
Dakhla (Morocco) – Boulanouar (Mauritania)
Rest day / border crossing: 381 km
A well-deserved day off, just to thoroughly service the cars and to let bodies recouperate. The 318km liaison between Morocco and Mauritania will take the convoy to the bivouac at Boulanouar.

STAGE 8: Wednesday, January 4, 2012
Boulanouar – Akjoujt (Mauritania)
SS: 425.89 km – Liaison: 9.66 km
The first Mauritanian stage. The start will be at the bivouac for for the motorcycles. A dramatic departure for the special looks very fast and relatively long. Competitors will follow the line of the railway connecting Zouerat in Nouakchott, used especially for the transport of iron ore. The course of the day will also include some parts of fairly easy off-piste. But there will be 45 km of such difficult terrain that René Metge knows that competitors will curse him. A section of dunes and camel grass where you have to be patient and careful not to get exhausted. After this comes the most difficult test. Tyres will have to be re-inflated for the run to the end of the stage.

STAGE 9: Thursday, January 5, 2012
Akjoujt – Akjoujt (Mauritania)
SS: 412.34 km
This loop around Akjoujt will be the most beautiful stage of the rally since it is dominated by sand and dunes, with some very rocky parts. Navigation will be most important because the traces fade quickly on the ground and the drivers will have no room for error, especially in the numerous wadis cut through the sand this year. The program of the day, crosses five passes, including that of Hnouk where competitors will feel very small. Those who believed that they knew the Mauritanian desert may be pleasantly surprised.

STAGE 10: Friday, January 6, 2012
Akjoujt – Tenadi (Mauritania)
SS: 445.48 km
This special in the heart of Mauritania is the longest of the 2012 AFRICA ECO RACE ®. It will also be one of the best and the one with most sand and dune crossings. Competitors  asked for a little hard test: they will be served. However, a large fast track of nearly 200 km will recover from the difficulties and be a pleasure for the driver. This last stage, 100% Mauritanian, will also no doubt be really interesting for the competition.

STAGE 11: Saturday, January 7, 2012
Tenadi (Mauritania) – Kebemer (Senegal)
SS: 280 km – Liaison: 394.76 km
On this penultimate stage of the rally, competitors will find more sand and dunes, especially in the first part of the special, not obvious because it is a mix of dunes to cross and grassy plains. The rest will consist of a wide sandy tracks slaloming between the dunes that lead vehicles up to a second stretch of dunes and plains. The finish is sometimes rolling but everyone will have to remain vigilant to the end so not to make a mistake just before the finish. 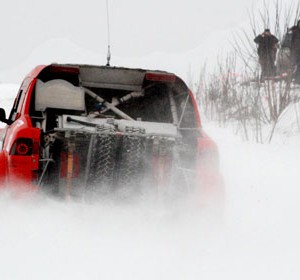 The 2012 FIA World Cup for Cross Country Bajas was announced last week with the Italian Baja taking its traditional place...
Copyright 2011-2016 Rallyraid.net - RISE Network. All Right Reserved.
Back to top