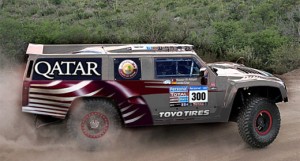 Car number 300 that is usually kept for the title holder will finally be present at the start of the 2012 Dakar. It will indeed be set on a Hummer that Nasser Al Attiyah will be driving for Team Robby Gordon, with Lucas Cruz as his co-driver.

« As of now, everyone will know where Qatar is on the map of the world », those were the words of  Nasser Al Attiyah after capturing his first victory on the Dakar last January in Buenos Aires. Achieving his dream after a fantastic battle with team mate Carlos Sainz, the flying Qatari was forced to settle with the strategic choices of Volkswagen that left him without a steering wheel after retiring from off-road rallies. Always keen for new projects, Al Attiyah bounced back once again in style and will live a rather busy 2012 year, including a WRC season, the London Olympics in shooting and of course a mouth-watering start with the Dakar where he will defend his title in a … Hummer!

His name was announced or whispered in all the title-contending teams, but it will finally be as Robby Gordon’s team mate that Al Attiyah will start the 2012 Dakar. And Qatar hasn’t finished gaining in notoriousness: indeed the Hummer H3 that will be prepared for him by the North Carolina based team will be carrying the colours of his country. “The thought of not doing the Dakar almost made me sick but things eventually turned around. It’s fantastic because it’s a new challenge for me and I’m proud of being able to represent Qatar”, insisted a delighted Nasser who doesn’t forget that his main goal will be to manage a double on the Dakar, a performance that only Ari Vatanen has achieved in two different cars (1990-1991 / Peugeot-Citroën). Until now, the best performance of the Hummer was third spot back on the 2009 Dakar when Gordon had only been beaten by the Race Touareg VWs of Giniel De Villiers and Mark Miller. With a virtuoso of the calibre of Al Attiyah and a totally new panorama in terms of title contenders, all hopes are alive. 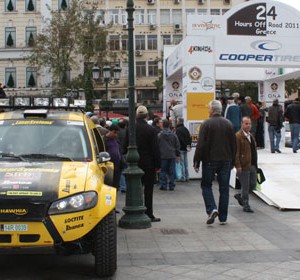 Sólyom Team is through a race lacking luck and full of mechanical failures. Problems started just outside the sunny Athens....
Copyright 2011-2016 Rallyraid.net - RISE Network. All Right Reserved.
Back to top