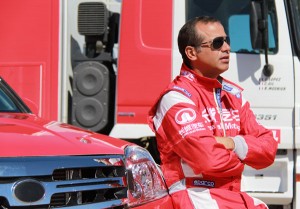 How did the invitation from Great Wall come out?

In the most unexpected way possible, since I had never had any contact with the team before. It all began in the middle of March, when they called and asked me if I was available to join a young and ambitious official team. At that time, I confess I had taken the Dakar out of my plans, as I couldn’t imagine myself going back again as a private pilot, supporting almost all the budget to compete, as it happened in 2010. In this context, the invitation was surprising as well as providential.

Which were the main reasons why you accepted this project from a not well-known team in Europe and with a short history in the Dakar?

Above all, the fact that the team has a very well structured project and it has realized that it was time to raise the bar a bit higher in its third participation. In fact, it is the first time Great Wall hires a foreign pilot to represent it, so I cannot feel anything else but pride for being the chosen one, in a year when there are several quality pilots available on the market. Although the team has not demanded for any final result, they are counting on my experience to help them obtain the best classification ever of a Chinese team in the Dakar. Considering the potential of the car and the professionalism of the whole structure, I think this goal is totally achievable, even if the Dakar is an event with many variables, which is almost impossible to finish with no problems. 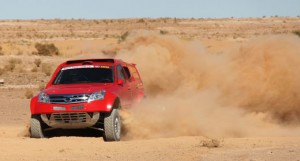 Much has been said about the new car and there is certainly some speculation about it. Is this car really at the same level as the present top cars, such as the X3, Mini or the new Toyota that have been arisen so much curiosity?

Since Volkswagen left the competition, i tis clear that the Mini are the cars to beat by the rest of the teams in this Dakar, because they are last generation cars and benefit from the experience of X-Raid. In normal conditions, Stéphane Peterhansel will be the great candidate to the first position, although he is only at 70 or 80 per cent of his full capacity. However, to the other places on the podium, I think everything can happen, even some surprises. Let’s pay attention to De Villiers with Toyota from Overdrive and even Nasser Al-Attiyah with Hummer… As far as we are concerned, we have a car with a good competition potential, but which is not already fit to fight for the first positions. In normal conditions, I think we can achieve a place in the top-10, even considering the first days, which will penalize me due to my lack of pace. From then on, we will see where can we place ourselves considering the other competitors, although our goal will always be to fight for the best place overall. In my last participation, two years ago, I was sixth and was the best private pilot and the best with a gasoline-powered car. To repeat that result with Great Wall would be fantastic.

After the test in Morocco, which conclusions did you take about the behavior of the car? And of the team?

The first conclusion is that we had little time to test and develop the car, since we only had a three-day session of testing in Morocco, which is really not enough considering a long and demanding rally such as the Dakar. Globally I was pleasantly surprised with this third generation of SUV Haval, because it seemed a very balanced car, whose main strength is its 3-litre Diesel motor, since its power is always available. Compared to the Mitsubishi, to which I was accustomed, i tis clearly superior at this point, although it lacks some adjustments as far as the suspension and alignments are concerned. Well, it will be something we have to sort it out during the event, because there was no time for anything else… As for the team, which is as it’s known led by the experienced Philippe Gache, one can tell that i tis extremely motivated for this challenge and has very significant means, not only human, but also technical, to assist both cars in a very professional way. However, we cannot obviously ask the team to make the same kind of investment as Mitsubishi or Volkswagen. 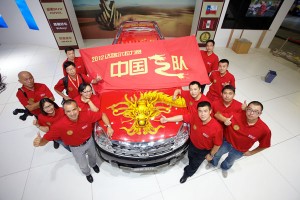 Considering that this is your first participation integrated in a new structure and with a new car, which are the goals established by you and by the team?

Personally I would like to get closer to my best result ever in the Dakar, despite getting a 4th place in the Dakar is something very difficult when there are so many strong competitors in the event. I always say that to justify any result we should analyze the teams and the pilots before the event starts. From this point of view, theoretically I believe that this year it can be even easier to be placed in the first five than it was back in 2003. As far as the team is concerned, the leaders of the Great Wall aren’t putting any pressure on me. To them the most important thing is to finish the event safely, as they told time and time again. The motto of the Great Wall has everything to do with the way we build a result in the Dakar: “Improving little by little everyday”.

I confess that I only truly had that perception after I was in China in the team’s official presentation ceremony, where I was completely surprised by the way I was welcomed. Although they have only recently started to discover the Dakar, the media coverage of this project has been fantastic, overcoming all my initial expectations. I can only say that there were about a hundred journalists in the presentation and most of them was perfectly aware of my sports history and my previous results in the Dakar. I confess that I wasn’t expecting that kind of treatment and welcoming, which made me immediately feel I was at home. In addition, the trip was equally important to get acquaintance to the product and the team.

What do you expect in global terms from this new Dakar, which is going to enter a new and unknown territory in Peru?

Despite being my 13th participation in the Dakar, this will be only my second time in South-American territory. So I expect the same difficulties I found in 2010, knowing beforehand that the route will have even more sand. Well, in an event of 15 days, I think we can and should expect a little bit of everything. It is natural that the track through the Atacama is the most selective and decisive, just like it was in Africa when we entered Mauritania. Entering Peru, close to the final, will be similar to what we will find in Chile, although the type of sand can be a bit different. At least, it will be something new to everyone.

Do you already have a kind of tactic of how to approach the race? Are you going to attack on the first days to gain advantage, which you can use in the though stages, or on the other hand are you going to start slowly and let the race itself “define” the results?

If we exclude the 24 Hour-race in Fronteira, I haven’t competed since April, so the first days will certainly be the toughest for me. I will try not to lose too much time in the first stages and get as soon as possible to the fastest pilot’s pace. After that, if everything goes normally, we can easily race among the 10 first and even go a bit further in the classification.

With the absence of VW in the Dakar, competiveness has theoretically been leveled, with the possibility of more cars achieving the first positions. Do you think this can somehow facilitate your race?

If we consider that Volkswagen won the last three editions of the race, we can reach to that conclusion. However that role is now played by X-Raid, since it is almost impossible to have another winner besides a Mini. In addition, apart from Carlos Sainz and Mark Miller, the truth is that, with more or less difficulty, the most important pilots will be there, which will make the race even more interesting. I think it is very positive to the competition that even more teams get interested in it and, especially after the absence of Mitsubishi and now Volkswagen, have the same professionalism and ambition. Great Wall, a team without a great tradition in motorsports, is a good example, because it has seen in the Dakar an excellent way to promote its products in a time that i tis trying to expand internationally. If all goes well, I believe that they are here to stay. And soon, I believe that other Asian teams will follow its path … 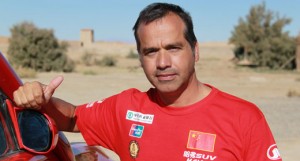 Do you think great teams like VW or Mitsubishi will be missed in the Dakar? Or on the other hand is the fact that they aren’t there positive because it allows other teams to be potential winners?

Competition is fundamental in any sport, because it makes the pilot or the team to always do better and constantly evolve. For now, and considering the absence of Volkswagen, I think it will be difficult to question the superiority of X-Raid, particularly of Stéphane Peterhansel, since he will no longer need to take risks like in the previous year to get back to victory. The other pilots of X-Raid don’t have his experience. However, as I said before, I believe that there are many candidates to the other positions and these will be achieved by whom we least expect.

This new project is only for the Dakar, or will you participate is some of the races of the FIA Cup with this car?

For now, the contract we signed is only for the Dakar 2012. However, as I was already informed, they are willing to keep this project going, so that the team can evolve and chase even more ambitious goals in the Dakar. In this context, it is clear that a good result in this edition would provide the chance to participate in more races and maybe even in the World Cup. But at this moment it is too soon to talk about it, since all the team’s energies are concentrated in the Dakar.

And finally a question that many Portuguese fans would certainly like to ask you: Do you intend to return some day to the Portuguese Cross-Country Championship? Or is that something that you don’t even question at this moment?

As long as I am competing at the highest level, I will always admit the possibility to return to the Portuguese Championship. But now that I am again an official pilot, it all depends first on the plans of the team. For now, I think that the priority will be the World Cup, which also includes at least two races in Portugal. 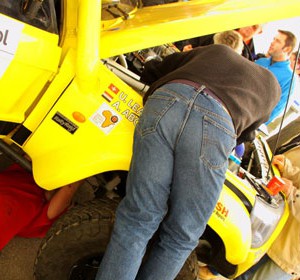 The weak winter sun shines over the southern French village of Saint-Cyprien and on a spit of land between the Mediterranean...
Copyright 2011-2016 Rallyraid.net - RISE Network. All Right Reserved.
Back to top