Over the rally fortnight, all eyes will be on the X-Raid team’s 4x4s, and above all on StéphanePeterhansel’s Mini. But on the Dakar, no one’s immune to technical faults or driving error. And there are plenty of contenders for the title just waiting for the competition to show the slightest sign of weakness, like former Dakar winners Nasser Al Attiyah (Hummer) and Giniel De Villiers (Toyota).

Dakar’s record-holding driver is StéphanePeterhansel. With the nine titles to his name – collected during the course of his motorcycle and car career – he ranks top of the winners’ list, standing out among the rally pilots as a talented all-rounder thanks to the qualities and experience he has acquired since first taking part in 1988. Since the end of the Mitsubishi era though, rivals from Volkswagen have been causing trouble for the Frenchman and his long-standing co-pilot Jean-Paul Cottret.

But the German brand’s withdrawal now puts Peterhansel in an ideal position on the way to earning his tenth title. Behind the wheel of the Mini that met with initial painful experiences on the Dakar last year with GuerlainChicherit, “Peter” is now tipped as favourite, but also warns ”the last thing we must do is start believing it’s all cut and dried”. The predictions being made everywhere at the moment all see X-Raid armada way out in front with their five Minis, including those of Krzysztof Holowczyc, winner of the Silk Way 2011, and Nani Roma who came third in Dakar 2006. But on the 8300 km of tracks and dunes that await them, they face tough competition that has re-formed in the other teams.

Despite his late entry, Nasser Al Attiyah has in no way lowered his ambitions after his victory last year. The big-name recruit from Robby Gordon’s team will be piloting a Hummer H3 that secured a place on the podium back in 2009. But the Qatari, who’s refined his driving skills over the years, may get even further with this vehicle than the impetuous Californian. When the hour of truth comes in Lima, a further former winner, Giniel de Villiers, could well have clinched it. The South African is the spearhead at Toyota who are aiming to get a Hilux pickup among the top 3. A second specimen of the vehicle is being entrusted to Argentine standard bearer OrlandoTerranova.

Given the density of outstanding vehicles on this year’s starting line, places in the top 10, let alone the top 5, will be fiercely contested. Apart from the Mini, X-Raid is also entering three BMW X3s (Garafulic, Mironenko, Schott) which, for example, will be battling against Christian Lavieille (eighth in 2011) behind the wheel of a brand-new Proto 011 Dessoude. The Great Wall from Carlos Sousa, who’s back again after missing a year (sixth in 2010), could also put a spanner in the works in just the same way as the Riwald team’s Mitsubishi Lancers and, in particular, the one driven by Bernhard Ten Brinke who recently won the Morocco Rally. 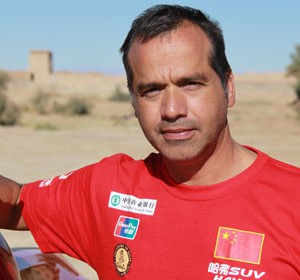 How did the invitation from Great Wall come out? In the most unexpected way possible, since I had never had any contact...
Copyright 2011-2016 Rallyraid.net - RISE Network. All Right Reserved.
Back to top