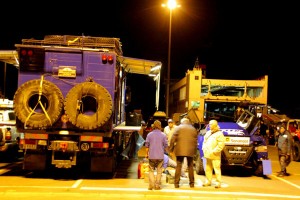 The world is full of necessary evils… things we have to do, place you have to go through to get where you are going… and yesterday that was Spain. Enthusiasm for the way ahead was put on hold when the bus pulled up at 4am ready for a 15 hour haul along the Costa Del Sol… But then in the port of Almeria another archetypical symbol of the way to Dakar was waiting in the form of the ferry that takes the convoy of vehicles from Europe to Africa… from the tarmac to the sea and suddenly the rather tedious road trip, where over a thousand kilometres was kicked off almost as an afterthought, turns back into an expedition. 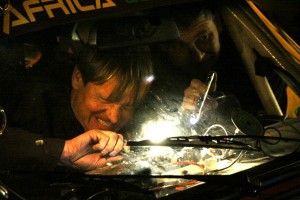 A whole car park was set aside so teams could make last minute checks and change the road tyres for the chunkier looking All Terrains for the coming stage. Outlandish looking buggies mixed with more normal looking pickups, including the beautifully prepared VW Amarok of Team Loomnas and the stunning looking Porsche 911 in ‘traditional’ Martini livery… which is actually ore than it looks… The furthest travelled team Transspecnaz from Moscow had time to get a leg of ham on a makeshift spit next to their beautiful buggy… and then under cover of a starless night we set off for the Dark Continent.

After a full 4 hours sleep to add to the 3 and a half I had the night before I got in the back of the press car before we disembarked and was asleep all through customs and the town of Nador, but when I came around to something resembling consciousness the view was absolutely stunning. A wide valley of ochre earth lined by distant, rugged mountains that were swathed in a post dawn mist. Small box-like houses were dotted here and there in the landscape and a bank of cloud was set ablaze by the rising sun… 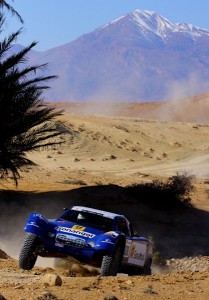 The start of the stage was at the foothills of the snow-covered Atlas mountains and a few kilometres in we found a rocky wadi (dry river) crossing with the majestic mountains in the background. With short stabs of maximum revs it was Jean-Louis Schlesser first into view and the tight twists and rough crossing were tackled faultlessly… and fast. In the first couple of hundred metres it is of course impossible to have any idea of what can happen in an event that is nearly two weeks long… but we could hear that the next car was slower… and then one car went the wrong way on the very first corner… and Sergei Savenko from the Transspecnaz team was completely missing! He eventually stormed passed last, just behind the Porcshe of Dr Eric Brandenburg.

Behind, in the truck class, the battle of the behemoths was under way from the drop of the flag. Tomas Tomecek slid his mighty TATRA around the corners and had it airborne as he powered out of the wadi. Two minutes behind was Portuguese lady driver Elisabete Jacinto had already caught the truck ahead of her, but unsighted by his dust crashed over some of the big rocks in the riverbed.

At the back of the field the two Spanish MX motor ‘baby buggies’ were pushing hard and looked spectacular. I will get more information about them later! 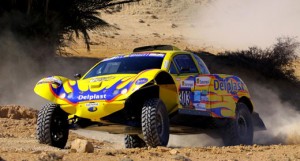 And while the last of the dust trails faded away in the gentle breeze we set off for a massive liaison section to the first bivouac… where it wasn’t Schlesser at the top of the timesheets… but Regis Delahaye in his MD buggy. “Rene Metge said today was going to be hard!” he smiled. “And it was! It was very hard to get any rhythm going as they were so many changes of direction, many stones and it was very hard to find the way. But apart from that it was a very beautiful stage and there were no problems with the car.”

Schlesser has parted company with co-driver Konstantin Zhiltzov in favour of three-time World Enduro champion Cyril Esquirol, but his baptism of fire in the navigator’s seat will have to end soon as the ‘Boss’ won’t be happy about giving so much time away again… 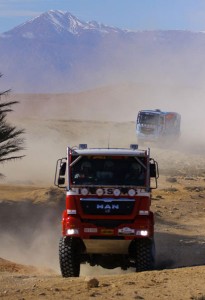 Many people had the same thing to say about the difficulty of the stage. Tomas Tomecek dropped two minutes to Elisabete Jacinto but is just happy to have got to the end. “Sometimes it’s good to build up to the hard stages,” he said at dinner. “But today was completely in at the deep end. I think about 40% of the cars are still out there… but 2 minutes is nothing in the Eco Race, so I am not worried.”

Tomorrow is a 350km stage, but the organisers have been assuring those few who made it to the briefing that it will be much easier than today. I will be in the helicopter tomorrow, so I hope that I will have some good photos.

Over the rally fortnight, all eyes will be on the X-Raid team’s 4x4s, and above all on StéphanePeterhansel’s Mini. But on the Dakar,...
Copyright 2011-2016 Rallyraid.net - RISE Network. All Right Reserved.
Back to top