The line of jet black mountains was outlined against the cobalt glow of the false dawn… and such a sight meant that I had had a lie in! 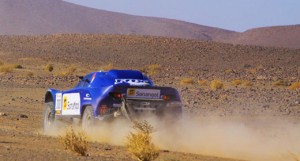 I was again with the Belgorod Offroad team and we headed off into the stage looking for a good spot to take photos and 20km in we came over a low pass out onto a huge dried lake. It looked stunning, but the most noticeable feature was the absolute silence. Footsteps on the hard and smooth ground sounded unnaturally loud and the sounds of the first cars started echoing off the mountains on both sides more than five minutes before they came into sight. Regis Delahaye was first after winning yesterday’s stage and was absolutely flat out across the completely flat surface. Jacques Loomans was 2nd but he couldn’t keep his foot totally down as he was in Delahaye’s dust cloud which hung in the still air.

The lake was the first time I’d seen the trucks at top speed and Tomas Tomecek and Elisabete Jacinto stirring up a massive dust trails were a sight to behold.

It was only a short little skip of 6 hours to drive to the camp and the first thing I did was to sit down at Sergei Savenko’s table with a bowl of borzch shared with Jean-Louis Schlesser. Savenko was celebrating finishing 3rd, but Schlesser didn’t seem in the slightest bit bothered that he won today. “I spent almost all the day in the dust. I got passed Looman’s but it was 150km before I could get by and there were many stones off the track. So today I was just patient. But I am very happy for Savenko. I am happy to see him in such a good position, he deserves it!”

Savenko was also relaxed as he refilled Jean-Louis’ glass with whisky. “We took the stage very calmly and took no risks and had no idea that the time would be so good. It was almost like a miracle! We really enjoyed the stage and have to say that the organisers have made this event perfect. We are really enjoying everything!”

Taking 4th today in his Crd Buggy was Michel Turon-Barrere. “So far all is very well,” he said. “Today we started 4th so were following Schlesser which was great, but then the tyre exploded at 150km and we were stuck behind Loomen’s and Savenko. But the end of the stage was very good, very fast. Today the result is good, but on the 1st stage we had to drive 100km in 1st gear so lost a lot of time.”

One place behind in the sleek and wide VW Buggy were the father and son team of Yves and Francois Fromont. “Morocco is such a beautiful country, the race is very well organised and we race in some incredible places.” Fancois smiled. “Today I made a few little mistakes, but nothing serious… which is good seeing as this is my first rally-raid!”

A bit less happy was Jacques Loomans who shrugged and said,” This was not my stage. The stones made it feel like we were driving on eggs so we couldn’t go fast… we had to just drive safe.”

Someone not taking it too safely though were Pavel Ushakov and Artem Shevelev who were beating their very bend Land Cruiser wit big hammers. I asked what had happened but they only said that an elephant had fallen out of the sky…

Elisabete Jacinto, taking what seems to be her customary last afternoon nap next to her truck, popped her head out of the tent long enough to tell me that she’d had a good day. “We had to stay behind Tomecek for about 100km but then we found a parallel track and got by him. And from there we had no problems… no stories… but then that’ good!”

And then as I wondered aimlessly about, trying not to go too near to the organiser’s tent in case they give me another official text to translate, I bumped into the delightful Sandra Bocande, who is special for several reasons. Not only is she a female drive which normally attracts attention in itself, but she is doing the race backwards from everyone else. We all start in Europe and then fly back from Dakar, but Sandra shipped her Nissan Patrol to Europe and is now racing back home… yes, she’s from Senegal! “I love challenges,” she smiled. “But I never did such a rally-raid in the desert before, so I am trying to learn from everyone who has much more experience than me. But also I am here to promote awareness of my illness; sickle cell disease. Last week I was in bed wondering if it would be possible to get here… My doctor said no, but it is great to be here, getting so much support!”

Tomorrow is a monster 740km liaison section for the convoy and a 376km stage for the competitors. And event director Rene Metge assures everyone that it will be the day of the co-drivers… 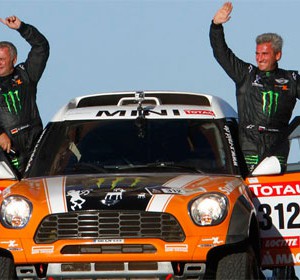