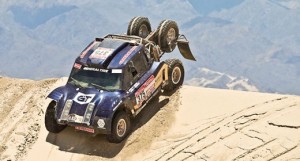 On the road to Chilecito on Wednesday, Darren Skilton had to battle for every kilometer on Stage 4 of the Dakar Rally. “The frustrating part is that I know my car is very competitive,” Skilton explained.  “I am so anxious to get this fuel issue resolved so I can really show what the Revolution VI is capable of.”  What started as a bid for a top ten finish has turned into a fight just to survive each stage.  When running properly, Skilton has demonstrated that both he and his General Tire-shod buggy are very fast.  The team finished the special in 8 hours and 33 minutes, and then had to navigate to the bivouac in the dark on a narrow shelf road clinging to the side of a cliff through the Andes.  “The Baja Designs HID lights on the front of the car are incredibly bright and tough as nails,” Skilton reported.  “Visibility is one thing that I never have to concern myself with.”

On Thursday in Stage 5 the course was altered due to heavy rains that washed out the first 29 kilometers of the course.  This shortened the already small Special Stage, and the rains provided the added benefit of traction in the notorious sand dunes of Fiambala.  Unfortunately nagging fuel issues continue to hamper the team; and with late arrivals each night and no opportunity to test remedies before each stage the problem continues to elude resolution.  Fortunately concerns about getting stuck or getting lost- problems that plagued the majority of the competitors last year- never surface in Stage 5.  Skilton finished in 5:02, which is slower than the team’s expectations but impressive when you consider that over 100 of the 443 competitors that started the Dakar Rally on January 1st were merely spectators by the end of the fifth stage.

Special Stage 6 was cancelled due to heavy snow in the Andes, requiring the event organizers to re-route the entire convoy further south for passage to Copiapo.  The race resumes on Saturday with a loop starting and ending in Copiapo before a much needed rest break on Sunday for Skilton’s Baja Automotive team.  From there the rally marches north through the harsh Atacama Desert towards Lima, Peru 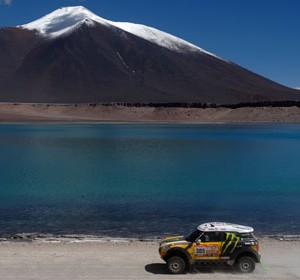 Although the day’s stage had to be cancelled, the competitors of the Dakar 2012 were able to cross the Andes Mountain Range...
Copyright 2011-2016 Rallyraid.net - RISE Network. All Right Reserved.
Back to top