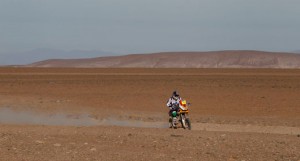 Despite being the first rider on the course, Marc Coma managed to avoid the muddy trap which later caught Cyril Despres. As a result, the Catalan took his 20th stage win at the Dakar and, most importantly, seized the overall lead, where he now has a 1’26” margin over Despres.

In the car category, it was also a Catalan who claimed the win in Antofagasta: Nani Roma, who beat Robby Gordon by 5 seconds. As a consolation prize, the American gained over 5’30” on Stéphane Peterhansel, whose overall lead has now dwindled to 7’36”.

Despres hands Coma his 20th win on a platter… Nevertheless, the 477-kilometre stage 8 between Copiapó and Antofagasta did not start well for Marc Coma, the first rider to hit the course this morning. After making a small navigation mistake in the first few kilometres, the defending champion was losing one minute… when everything changed at km 11. The Catalan, who was still riding at the front of the race, avoided a muddy río and forged ahead, while Cyril Despres fell into the trap. The overall leader’s bike got stuck in the mud, taking Paulo Gonçalves with him… Both of them spent almost ten minutes and massive amounts of energy to get out of there. Suddenly, the path to victory had cleared for Coma. It was a chance he could not possibly miss! Aware of his rival’s mishaps, the Catalan rider put the hammer down from the very beginning, until the risk of damage to his own motorcycle made him lower his pace near the finish. In the end, he bagged his 20th Dakar win (fourth one this year) with a 7’00” gap over Portugal’s Ruben Faria and 8’44” over Hélder Rodrigues, another Portuguese rider. 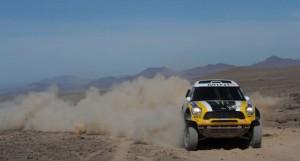 Nevertheless, the motorcycle race officials rectified the situation after the end of the stage: given that the organisers had changed the route of today’s stage after the seventh motorcycle had gone by (in order to prevent the caravan from getting stuck in the muddy río), the race directors decided to deduct the time lost by Coma, Despres, Gonçalves, Rodrigues, Farrés Güell, Ullevalseter and Casteu from their final times. As a result, Marc Coma seized the lead with a 1’26” margin over Cyril Despres. Behind them, the last podium step is still up for grabs, with Hélder Rodrigues in third place, 20’51” ahead of David Casteu, who today climbed to the fourth place. Paulo Gonçalves now sits fifth, 2’19” behind the Frenchman. 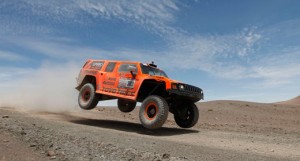 Roma beats Gordon by a “nani”-metre… In the car category, Robby Gordon gave it his all once more in an attempt to get his first stage win in the 2012 edition. And it seemed so close for eight minutes, until the ever-consistent Nani Roma arrived and ended up winning… by 5 meagre seconds! Nevertheless, this propelled the American up the overall classification thanks to his gains of 2’04” on Krzysztof Hołowczyc and 5’33” on Stéphane Peterhansel, who went down with a flat tyre 30 km before the finish. As a result, Gordon now sits in second place, 12″

Today’s stage was once more marked by the bad luck of Nasser Al-Attiyah, whose Hummer was plagued by technical problems again. The Qatari, who was the first driver on the course, was forced to stop several times during the special due to reasons including wobbly spare tyres and alternator problems. Despite finishing the stage at full speed, the defending champion lost another 8’09” and is now 45’25”

behind the race leader.

Throughout most of the special, today’s quad race saw a lone rider:

Alejandro Patronelli, who led the special at the first three checkpoints and only surrendered the lead in the last few kilometres, when his brother Marcos surged ahead to win by 38″. This new stellar performance by the two Argentineans was only threatened from afar by the inevitable Tomás Maffei, who lost 9’50” but defended his second place in the overall classification, where Marcos Patronelli inched closer to him and now stands 12’52” back.

Finally, the truck category. After finishing the last two stages in second place, the Czech Republic’s Ales Loprais has finally taken his first win in this edition, which is also his fourth Dakar victory. He won by 1’31” over general classification leader, the Netherlands’ Gerard de Rooy, who nevertheless kept a comfortable margin of 15’39” over Loprais and 48’06” over his Dutch teammate Hans Stacey 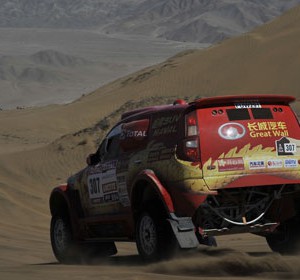 After a well-deserved rest day in Copiapó, which the drivers took to regain strength and reevaluate the mechanics of the SUV Haval...
Copyright 2011-2016 Rallyraid.net - RISE Network. All Right Reserved.
Back to top