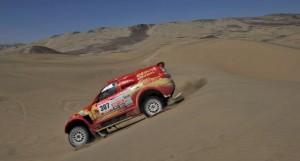 It was the end of the 33rd edition of the longest and most difficult rally in the world. After 15 days of race and almost 10.000km between the Argentinian resort of Mar del Plata and the Peruvian capital Lima, the podium placed in the historical Plaza de Armas or Plaza Mayor welcomed today the heroes of the 2012 Dakar, among them the Portuguese driver Carlos Sousa, best Portuguese car driver and the main responsible for offering Great Wall Motors the best result ever of a Chinese team in the event.

Repeating the achievements of 2005, 2006 and 2007, Carlos Sousa concluded his 13th participation in a Dakar in the seventh position overall, and is now waiting for the result of Robby Gordon’s appeal, after the technical irregularities detected in his Hummer, to eventually achieve the sixth place as he did in 2010.

With a feeling of accomplishment and full conviction that it would be impossible to do better, Carlos Sousa kept his promise of returning in an excellent shape to the Dakar, after last year’s forced absence, and leading one of the youngest and inexperienced teams in the car squad to the international foreground.

“Considering the youth of this project and the several constraints related to this participation – such as being inactive since April and having tested during only three days in Morocco –, it is clear that I am very happy with this result. I kept my promise of finishing the race within the top-10 and I know that I gave my best every day of these two weeks. It was not always easy, because we also had some mishaps, especially in the first two stages in Peru, where we suffered several problems and a delay of more than two hours. I use to say that in the Dakar it is normal to have a bad day… Only this time we had two in a row! With a little more luck, I think we could be one position higher overall today. But the Dakar is like that and the important thing is that the team is extremely pleased with the result, which has really exceeded its officers’ best expectations”, summarized Carlos Sousa after the first Podium Ceremony in Lima.

Regular and consistent, despite the annoying flu which hindered him during the first week and the continuous problems with the engine cooling system and his SUV Haval setup, Carlos Sousa even feared we would be forced to give up, due to his co-driver Jean-Pierre Garcin’s neck injury, which forced the French to wear a cervical collar during the last two stages.

“We overcame unusual situations during this Dakar, but I think these give our result even more merit. Anyway, I think we proved the enormous potential this project can have in the future, in case the team decides to invest a little more in the preparation of the next Dakar and the solution of some fundamental problems with the car. But this is a decision that must be taken mainly by the team”, revealed Carlos Sousa, a day before his 46th anniversary and also the meeting with the vice-president of Great Wall Motors to discuss the future and eventually the renewal of his contract.

“No matter what the future may hold, I feel that I have already played my part, in order to give the world’s motor sport another team interested in investing and promoting itself internationally through the Dakar”, concluded the driver, who is coming back to Portugal on January 23rd. A final note to Zhou Yong’s good performance, who, despite the long delay of the first stage and the two-hour penalty, finished in the 20th position overall. 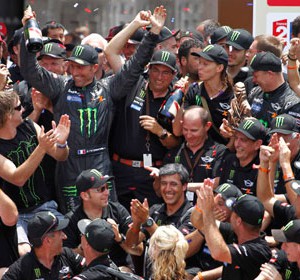