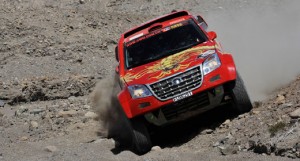 Carlos Sousa confirmed today the seventh place overall in one of the most mythical stages of the South American Dakar and one of the most spectacular arrivals of all event, with the famous and steep descent towards Iquique, with the Pacific Ocean in the horizon! Being the seventh fastest to conclude the special stage with 556 km – the longest in the whole rally –, the Portuguese driver from Great Wall keeps Novitskiy’s MINI under pressure, getting closer to him for the second day in a row …

At a moment when the race is its most decisive phase and the slightest mistake can have serious consequences in terms of ranking, Carlos Sousa was again beyond reproach at the wheel of the SUV Haval of the Chinese team Great Wall Motors.

With scarce technical means to compete with the main car teams, the Portuguese driver has been making use of is extreme consistency and huge expertise to consolidate a historic result to a team that began its relationship to the greatest rally in the world only three years ago.

For now and by contrast with what happened to the winner from the last edition, Carlos Sousa completed the longest stage of this Dakar, in a total of 565 km from Antofagasta to Iquique, taking benefit from Nasser Al-Attiyah’s withdrawal to climb one more position overall and placing himself in seventh again, where he was after the fifth stage.

“It was a long and weary day, that’s for sure, but we manage to succeed without any great problems, despite some dangerous out of track passages and some serious navigation work. My greatest helplessness is not being able to keep the same pace as the MINI’s… It is frustrating watching then passing by and not being able to react. In short, it is an uneven battle that we have to fight to the end, and continue to bet on our consistency and the reliability that the Great Wall has shown until now”, affirmed Carlos Sousa at the finishing line of the this ninth stage, where he gained some time to Leonid Novitskiy’s MINI for the second day in a row.“We gained 51 seconds today, which is not much considering how far we are from him overall – about 15 minutes. Even though we know that it won’t be easy to close this gap until the end, we are going to try to keep him under pressure in the next stages”, promised the best Portuguese car driver.

Tomorrow’s stage, on Wednesday, is along the Pacific coast with a privileged view to some of the best surf beaches in the world. The track connects the cities of Iquique and Arica, in a total of 694 km and includes a special stage of 377 km, where the main difficulty will be passing through the long the complex web of sand barriers and dunes of the Atacama. 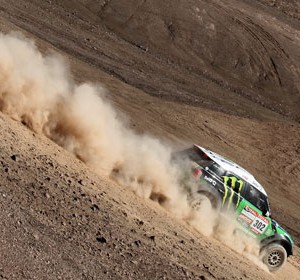 Since the 2012 Dakar Rally was started 10 days ago in Mar del Plata, Argentina, the Monster Energy X-raid Team has been holding...
Copyright 2011-2016 Rallyraid.net - RISE Network. All Right Reserved.
Back to top