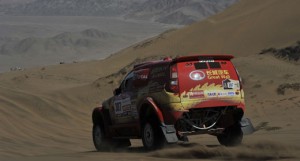 After a well-deserved rest day in Copiapó, which the drivers took to regain strength and reevaluate the mechanics of the SUV Haval of the Chinese Team Great Wall Motors, Carlos Sousa returned today to the competition and got an excellent seventh place in the longest stage of this 2012 Dakar so far, in a total of 447 km of special stage.

In a stage driven on very tough paths and four hours and a half long, Carlos Sousa overcame all difficulties and beat two of the five official MINI in the race, namely the Russian driver Leonid Novitskiy, the first leader of the rally and currently seventh overall, to whom the Portuguese driver recovered today about two minutes and a half.

“We started the track cautiously, trying to understand if it was everything alright with the car after the general car servicing from yesterday, during the rest day. Although I still feel some difficulties, due to the still unstable rear end, I increased the pace gradually, forcing it in the fastest parts and defending myself a little in the areas of worse path, where I could easily get a puncture”, explained the best Portuguese overall when he arrived at Antofagasta.

“Six days away from Lima, it is hard to predict what is still to come in terms of final result in this Dakar, considering the apprehension felt towards the two first stages in Peru. In normal conditions, it will be difficult to get a higher place overall… But the result from today was particularly motivating, giving us some hope to still put Novitskiy under some pressure”, admitted Carlos Sousa, who still has to recover 16 from the Russian driver of the official team MINI.

“For now, we increased our advantage to our main follower and overcame another long and strenuous stage. For now on, I believe that the difficulties will increase even more, so we will have to be very focused on our race and avoid any problem that may compromise this fantastic result for the team Great Wall Motors”, concluded Carlos Sousa, on a day on which his team mate Zhou Yong came in 18th overall and placed himself among the first 30 car drivers overall.

Tomorrow, Tuesday, another long day is expected for the drivers, considering the 566 km of the special stage, divided into two sections. In the first part, the traditional fesh-fesh ought to be the main difficulty on the track along the Pacific coast. In the second part, the co-drivers’ orientation will be put to the test, as well as the drivers’ expertise, in the famous (and vertiginous) descent to Iquique, where the bivouac of this eighth stage will be placed. 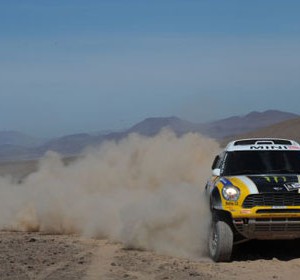 It was one of the longest special stages of this year’s Dakar Rally and at the end of the exhausting 477 kilometres, Nani...
Copyright 2011-2016 Rallyraid.net - RISE Network. All Right Reserved.
Back to top