In a physically very demanding stage, which included two paths at about 3 thousand meters high, rocky tracks and several river crossings, Carlos Sousa faced some several ordeals, but he managed to get two places overall back to the top-10, despite the strong flu that hindered him during the whole day. 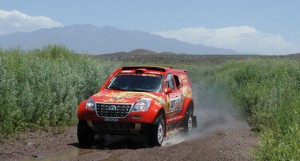 “It was an extremely difficult day. I had a rough night and woke up with the flu. Despite the medication, I felt under the weather and never at 100 per cent, today of all days that we had to face such a tough and demanding stage”, affirmed the driver of Team Great Wall Motors when he arrived to San Juan, after a distance of 499 km for the cars, from which 208 corresponded to the third special stage of this Dakar 2012.

“Despite everything, we didn’t lose much time after all and I can only be glad that I overcame one more day, on which he had another flat tire and were blocked for most of the stage by the Argentinian driver from Toyota”, explained Carlos Sousa, referring to Lucio Alvarez’s poor sportsmanship, who he reached soon after the first 40 km of the stage.

“We were being faster in track, but he decided not to let us pass… When we finally passed him after several attempts, we bumped into a rock and punctured the tire. At the end, we reached him again but he blocked us once more. At the arrival he excused himself by saying that he never saw me behind him… Well, it was a pity, because we were driving fast at the end and could have taken some good three minutes to our final time”, complained Carlos Sousa, who like yesterday, finished the stage in the 11th position overall, losing 8m21s to the winner, the MINI from the Spaniard Joan Roma.

“The pace at the front of the race is very strong and the fight is pretty fierce, since the first five positions are separated by a bit more than two minutes! Personally I was counting on losing some time in these first stages, due to a lack of competitive pace and a need to adapt myself to the car. The engine is very good, but there are still some adjustments to be made to the suspension, because I still feel the car’s rear end slipping… It’s something we will have correct during the next few days”, concluded the best Portuguese car driver, occupying the 9th place overall.

As for the other official driver of Team Great Wall Motors, the Chinese Zhou Yong, he is passing up the order overall. After the initial problems he managed to be the 25th fastest driver in today’s stage in his HAVAL SUV.

Tomorrow, Wednesday, the drivers will face the longest stage from this edition in Argentina, in a very demanding track in terms of navigation, which will connect San Juan to Chilecito.

With a total of 750 km, the fourth stage of Dakar 2012 will include a special stage of 326 km filled with traps, which will therefore demand full concentration in the gear shifts, especially when crossing the dry rivers and canyons in the province of La Roja. According to the Organization, this stage can really be decisive to some favorite drivers’ aspirations, and it is likely that some teams will accumulate a considerable delay when arriving to. 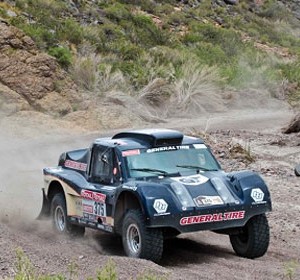 After a strong finish on the first short special, Darren Skilton made the long liaison to Santa Rosa de la Pampa.  The second...
Copyright 2011-2016 Rallyraid.net - RISE Network. All Right Reserved.
Back to top