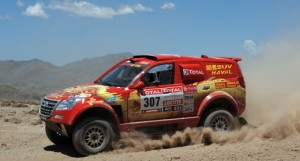 In what was perhaps the most selective stage of this Dakar 2012, with 327km full of small traps and subtle changes of direction, Carlos Sousa appeared in good shape – recovered from the flu that affected him the day before –, repeating the sixth position from the opening stage and reaching the eighth position overall, only one second behind the seventh, who was the winner of last edition.

“It was a very demanding and particularly tough stage in the first phase, where I chose to play it safe to avoid a puncture, something that has been recurring on the last two days. After we reached a top almost 3.500m high, we gradually increased our pace and manage to accomplish what is for now our best stage in this Dakar, after the minor setbacks from the last days”, summarized Carlos Sousa when he arrived at Chilecito, the Argentinian province of La Roja, at the end of tonight.

In a stage with more than 400 navigation notes run once again under high temperature, the Portuguese driver made use of his large consistency and expertise to avoid many traps along the track and increase the pace enough to climb some positions overall and reduce the distance to three of his most direct opponent, on a day he lost a little more than one minute to the leader of the race at the beginning of this morning stage:“I am getting used to the car as each day goes by and naturally I feel more and more confident. ~I have been making some changes to the set-up of my SUV Haval, trying to find a solution to the car’s rear end tendency to slip… It hasn’t been easy, because even the team is still learning to handle the car. Apart from that, the greatest difficulty has been keeping a constant pace under this scorching heat! Fortunately my fever is gone, and I didn’t have any distracted driver blocking my way, so I could drive more focused, in a stage that also demanded hard work in terms of navigation”, completed the driver of Team Great Wall Motors, enhancing the good performance of his recent co-driver, the French driver Jean-Pierre Garcin. 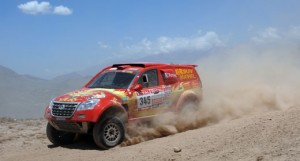 A special remark to the excellent 21st position achieved by his team mate, the Chinese driver Zhou Yong, that has been gradually recovering positions overall after the long delay in the opening stage.

Tomorrow, Thursday, the drivers will run the last stage of this edition in Argentinian territory, between Chilecito and Fimbalá, in a total of 423 km. Once again the Organization set a different track for each category, so that the special stage is 177 km long for the cars and trucks and 265 km long for bikes and quads.

Either way, all competitors must pay increased attention, in order to avoid navigation mistakes, on a track where the main difficulties for the cars and trucks are hidden in… the sand. 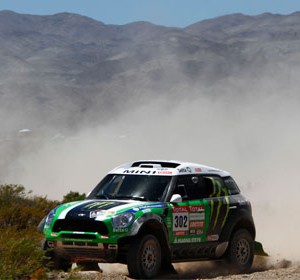 The defending champion took his 18th career stage win at the Dakar, but his goal of conquering the general classification...
Copyright 2011-2016 Rallyraid.net - RISE Network. All Right Reserved.
Back to top