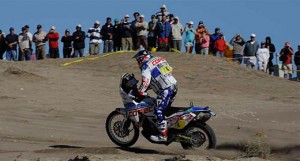 After spending most of the year injured, Francisco López took the first stage of the 2012 Dakar in the motorcycle category and now leads a provisional top 5 which represents a break with tradition. Argentina’s Javier Pizzolito (19th last year) finished third. In the truck category, Marcel van Vliet repeats his 2009 exploit by winning the first stage.

Among all the race favourites, Francisco López is the one who has done the most to keep a low profile. But now that the chips are down, it is he who banged his fist on the table harder than anyone else. The Chilean rider sustained a hard fall in last spring’s Rally of Tunisia. His bone fractures meant that the Dakar seemed a distant, even uncertain prospect. After going under the knife on six different occasions, the recovering López was able to start the Pharaons Rally, which he finished in the 36th position. Therefore, during the scrutineering process, “Chaleco” merely emphasised how happy he was just to be able to start the Dakar. But after the first few twists of the right handle, in the short, 57-kilometre-long special stage, he simply cracked the time set by Marc Coma a bit earlier. This was despite the Spaniard’s good memories: he had already won on the road to Santa Rosa in the opening stage of the 2009 Dakar. But this time round, López took his sixth stage win in the rally, which lifts him to the top of a never-seen-before general classification.

Hot on the heels of Marc Coma comes Javier Pizzolito, who posted the 3rd best time in today’s stage. Pizzolito is promised a warm welcome in Santa Rosa once he has completed the 620-kilometre liaison. He has just turned in the strongest performance by an Argentinean rider at the Dakar! He lies just ahead of “miracle man” Quinn Cody, whose motorcycle took a detour through Lima just before reaching Mar del Plata in the nick of time, 4th at 30″, while young Jakub Przygonsky rounds off today’s Top 5, 49″ behind “Chaleco”. Cyril Despres lost 1’48”. 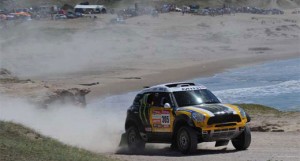 Updates on the car category: although the likelihood of a Mini win was obvious to even the least knowledgeable of pundits, the identity of the winner is slightly surprising. The length of today’s stage means that performances here are not too representative, but Leonid Novitskiy exploited his best driving skills to seize his first special stage win at the Dakar. The 2011 Rally Raid World Champion started 13th and pipped his teammates Krzysztof Holowzyc and Stéphane Peterhansel at the finishing line, besting them by 5″ and 9″ respectively. At the end of the day, X-Raid has three Minis at the top of the classification, ahead of Giniel de Villiers, who posted a strong performance in the Dakar debut of his Toyota Hilux.

Things are getting much more complicated for Nasser Al-Attiyah, racing for the first time at the wheel of a Hummer today. Although his time deficit of 9’45” to Novitskiy is not too significant, the reliability of his vehicle is quite worrying. 2 km away from the end of the special stage, his H3 ground to a halt due to problems with oil pressure and the Qatari driver had no choice but to be towed to the finish by teammate Robby Gordon. In the surprises and disappointments department, the failure of the day was that of Alfie Cox, whose Dakar came to an end before he could even reach the finish of the special stage. The former motorcycle rider from South Africa had built an ambitious project with Team Pewano, but he burned the Volvo XC-60 he was taking to the Dakar for the first time. The crew escaped the fire safe and sound but the car was totally destroyed by the flames.

As for the quads, Sergio La Fuente finished the Dakar 2011 with the satisfaction of clinching 14th, and dead last, in the general classification. He marked his return to the race by posting the best time in the special – never before had a Uruguayan won a stage in the rally. He can also be proud of beating the 2010 Dakar champion Marcos Patronelli by 54″, with Tomás Maffei lurking in third, 1’07” back.

In the truck category, one has to go very far back to find a stage without a single Kamaz
in the top six.  Marcel van Vliet, who was clearly targeting the opening stage, took his second Dakar stage victory after winning the first stage of the 2009 Dakar… in Santa Rosa. This time round he bested Gerard de Rooy by 26″ and Franz Echter by 56″. Most importantly, there are now three Iveco trucks in the Top 5, with Miki Biaison and Hans Stacey staying close to their teammate in this same order. 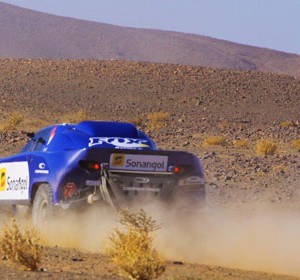 The line of jet black mountains was outlined against the cobalt glow of the false dawn... and such a sight meant that I had had a lie in! I...
Copyright 2011-2016 Rallyraid.net - RISE Network. All Right Reserved.
Back to top