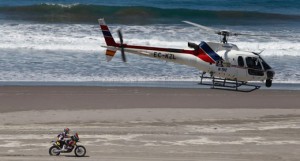 KTM’s Marc Coma was again the dominant rider in Stage 12 of the Dakar 2012 as riders tackled their second stage in Peru. The Spaniard played the waiting game and then made his attack in the final part of the timed special to be first over the line when riders reached Nasca. He now has a lead of 1 minute 35 second over teammate Cyril Despres, the smallest of margins after 11 days of hard riding in this 9,000 km journey.

KTM’s two lead riders are both going for their fourth Dakar title and continue their cat and mouse game of tactics that has emerged as one of the most exciting elements of this year’s rally.

Coma started third today, a tactical move that paid off when he crossed the line in the lead after the 245 km of the timed special. He was the first of a trio of three Spanish riders with Joan Barreda Bort and KTM rider Jordi Viladoms coming in second and third. Despres was fourth and may deploy similar tactics tomorrow in the second last stage and if so, this is guaranteed to set up a nail biting finish to the thirty third edition of the rally. The 2012 edition will be the first to finish in Peruvian capital of Lima. 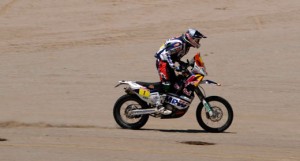 Coma now has five stage victories in this year’s rally and Despres has four to his credit and the two KTM riders, considered the greatest modern exponents of rally raid have long distanced themselves from the rest of the field. Third placed Helder Rodrigues of Portugal is currently in third but he trails the lead rider by a massive one hour 13 minutes and 49 seconds.

It was a good day for KTM support rider Rubin Faria who finished sixth and moved up to 12th overall. Faria is Despres’ water carrier while Johnny Aubert, KTM’s Dakar rookie, who is now performing the same function for Coma after his support rider Joan Pedrero had to retire in Stage 11. Aubert is a member of the KTM Enduro Factory Team and is riding a standard KTM 450 Rally Replica in his first Dakar.

KTM’s Felipe Zanol of Brazil and Aubert, who both had an excellent day yesterday in the initial stage in Peru came unstuck in the dunes in the last part of today’s timed special to eventually come in in tenth and eighteenth respectively. Eight of the top ten riders in the overall standings are currently on KTMs.

Today’s stage took riders along the Pacific coastline on a 259 km liaison before entering the timed special. They rode through the area of the famous Nasca Lines, the ancient phenomenon that is now a world heritage site but they also had to cope with some 20 km of dunes at the end of the day.

What Coma and Despres said at the end of today’s ride is a reflection of the wily nature of their rivalry. Coma played his cards close to his chest and in his usual non-committal way said: “I set off four minutes after Cyril and I managed to catch up with him. For the entire first part of the special I mainly focused on navigation, because there was absolutely no room for mistakes. After that, I knew that there would be good opportunities to attack in the second part and that’s where I managed to regain ground on Cyril. It’s no way near over, because there’s another big stage tomorrow.”

For his part, Despres paid tribute to Coma, describing him as ‘quick and clever’. He also said it was a “magnificent stage”. “It was one of the finest specials that I’ve ridden on the Dakar over the last few years. In sporting terms, I expected that Marc was going to catch up with me and that it wouldn’t be a good day. But it was majestic. I don’t have any regrets, because I attacked throughout the first part. You have to go for broke on this Dakar; it’s not a race where you can play the waiting game. Against Marc Coma, I’m doing battle with an excellent rider. He’s quick and clever. So, I try and find the right pace. Apparently, there are riders in between us, so that’s good news for the start tomorrow.

Tomorrow, Saturday riders go from Nasca to Pisco before the big finish on Sunday in Lima. This will certainly be a highlight for KTM’s Peruvian fans as they help celebrate their country’s first inclusion into the South American edition of the Dakar Rally. Should either Coma or Despres take the title it will be KTM’s 11 Dakar victory. 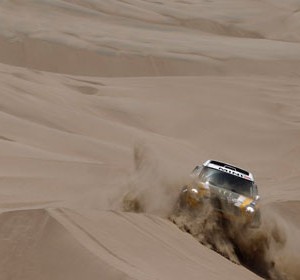 All the Monster Energy X-raid Team drivers had expected a difficult 13th special stage but what they had to cope with exceeded...
Copyright 2011-2016 Rallyraid.net - RISE Network. All Right Reserved.
Back to top