Things are getting tight at the top of the motorcycle classification: Marc Coma seized his third career victory in Copiapó and clawed back 2’03” from Cyril Despres, who managed to defend his lead before the rest day. 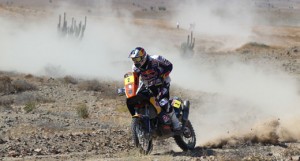 A war of nerves started today between Marc Coma and Cyril Despres, who spent the entire stage keeping an eye on each other while riding at full speed, on very fast sand courses in the first part of the special and then in strings of dunes which they crossed without blinking or losing sight of each other. On the other hand, many motorcycle riders will have no choice but to spend the night here! At any rate, Cyril Despres kicked off the stage by navigating at the front of the race. Marc Coma locked on to him to post the fastest intermediate times and had already put one hand on the stage win by the middle of the special. After the neutralised sector, the Catalan pilot overtook his teammate and started blazing a trail through the dunes. Despres played it safe by matching his rival’s pace and conceded 2’03” at the finish, but managed to keep his lead in the general classification with a margin of 7’48”.

Behind the two favourites, the battle rages on among podium contenders, who could still earn a bigger prize should the leaders collapse. It has happened before! Paulo Gonçalves proved his win in Iquique last year was much more than a stroke of luck by posting the third best time in today’s special, 2’49” behind Coma (and just 46″ behind Despres). His performance also moved him closer to his fellow countryman Hélder Rodrigues, over whom Cyril Despres still has a very comfortable margin of 49’39”. Francisco “Chaleco” López produced the most disappointing performance of the day: the local hero started the first Chilean special in the 2012 Dakar with a fall which handicapped him for the rest of the stage. He finished half an hour down on Coma and almost fell out of the Top 10. 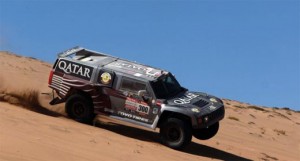 Nasser Al-Attiyah, on the other hand, is gradually upping his game and is now on a quest to climb up the general classification which could see him crack the Top 5, especially if he is able to keep up today’s infernal pace. The eleventh driver to start this morning and his Hummer already held the sixth best time at the end of the first part of the special (km 143). He then morphed into the Usain Bolt of the desert and overtook five cars in the last 200 kilometres. And not just any cars: De Villiers’ Toyota, Sousa’s Great Wall and Leal dos Santos and Novitskiy’s Minis. This earned him his 14th stage win at the Dakar and reduced by 7’53” the gap with Stéphane Peterhansel, who defended his overall lead.

Having a fighting spirit is obviously a shared value at Team Gordon.

Just like his star draftee, team boss Robby produced a stunning performance. He lost some time at the beginning of the stage and only held the 42nd best time at km 31. But the Californian crossed the finish line after a spectacular drive, placing another Hummer behind Al-Attiyah’s in the special classification, with the symbolic satisfaction of having beaten the Minis, including Peterhansel. In the general classification, as of the rest day the Frenchman still seems on track to take his 10th win at the rally. The gaps behind him are very small, with Krzysztof Hołowczyc 11’22” back and Robby Gordon 13’09”

back in third. The Hummers have not had their final say yet.

It was also a very eventful stage in the quad category, with a never-seen-before Top 3: Alejandro Patronelli ahead of Ignacio Casale

(+16’10”) and Sergio Lafuente (+33’59”). But the loop around Copiapó also yielded unexpected changes in the general classification, with a transfer of power at the top. Alejandro Patronelli toppled Tomás Maffei and now leads him by 58’53”. Nevertheless, the main event of the day was the massive amount of time lost by Marcos. The 2010 champion finished the stage 1 h 20′ behind his brother. Marcos still has a podium place, but the race is now Alejandro’s to lose. This upheaval benefitted two young competitors: Lucas Bonetto, fourth in the general classification, and Ignacio Casale, fifth. Both are more than two hours back but their consistency has yielded its first tangible reward.

The De Rooy saga continues in the truck category. The team leader took his third win straight and seems poised to take the overall victory in Lima. While the Kamaz menace has been blunted by Eduard Nikolaev’s disqualification, the Ivecos will have to keep an eye on Ales Loprais, the most consistent of their rivals. After finishing second yet again in today’s stage, 3’59” behind Gerard de Rooy, he has so far been able to limit the gap between them in the general classification to 17 minutes.

More or less the time lost in the event of a flat tyre! 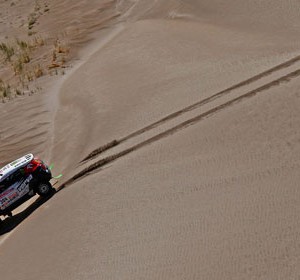 Following yesterday’s unintended day of rest, the X-raid drivers had to contest a loop stage around the Chilean city of Copiapo,...
Copyright 2011-2016 Rallyraid.net - RISE Network. All Right Reserved.
Back to top