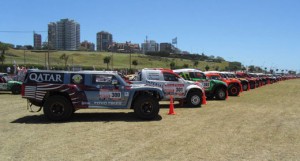 443 vehicles will take part in the 2012 Dakar, which will start from Mar del Plata and head towards Lima, where the pilots will arrive following an 8,300-kilometre trek through Argentinean, Chilean and Peruvian territory. The battle for the four titles at stake is about to begin.

At this time of the year, beaches in “La Feliz” are packed with holidaymakers every day. But today, all eyes are focused on Plaza Colón, a bit further from the sea, where a podium has been set up for the presentation of the teams to the public before the race. This ceremony is usually held before tens of thousands of spectators, who have 443 vehicles to marvel at and applaud this year. Despite the festive ambiance in the city, the atmosphere must feel quite chilly for a handful of competitors who will have to forget their ambitions. Indeed, seven quads failed the technical checks, since they were too different from the production models they were supposed to represent. “Prototypes” are not allowed in this category! Although they will be allowed to participate, Josef Machacek (5-time winner), Lukasz Laskawiec (3rd in 2011), Christophe Declerck (4th in 2011), Rafal Sonik, Antoine Leconte, Norberto Cangani and Maciej Albinowski are no longer eligible for the general classification. The path to victory seems clear for the Patronelli brothers, or at least for a battle among South Americans. 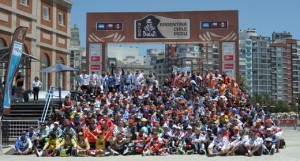 Although their fate is yet to be decided, four motorcycle riders are also in a situation which will probably make them smile in a few days’ time, but which is giving them quite a few headaches at the moment. Iain Stevenson, Neil Scott-Thomas, Darryl Curtis and Greg Raaf’s motorcycles were delayed on their trip from the United States. As of December 31, the ship carrying them has only reached Delta Dock, roughly 500 km from Mar del Plata. In order to give them a chance to win this first time trial, the organisers decided to make headway with the administrative part of their scrutineering and call for help from the Argentinean authorities to speed up customs procedures, but seeing these four riders at the starting line is not a done deal. The deputy manager of the rally, David Castera, has asked them to be ready for tomorrow morning at 5 am if they are able to bring in their motorcycles for a simplified technical scrutineering process. 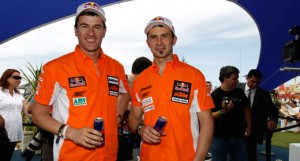 The four victims of sea transport misadventures would be happy just to start the race, but other pilots are already thinking about the top step of the podium in Lima. Among them are Cyril Despres and Marc Coma, who walked around the aisles of the scrutineering area clad in identical orange shirts. Their relaxed mood and companionship contrasts with the tense relationship they have had over the last few years, and the defending champion shows he wants to keep things that way: “Things have calmed down a lot between us, I think it is much better to start the race in this state of mind.” In the car category, Nasser Al-Attiyah has also teamed up with a former rival, Robby Gordon, who has put him at the wheel of a Hummer H3 decorated with the colours of Qatar. He will probably have to beat a former teammate if he wants to mount a successful title defence: at the wheel of his Mini, it looks like Stéphane Peterhansel has got what he needs to finally take his 10th win after years of trying. 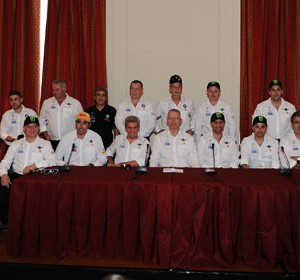 Tomorrow, on New-Year’s Day, the Monster Energy X-raid Team will start into the 2012 Dakar Rally, taking the competitors...
Copyright 2011-2016 Rallyraid.net - RISE Network. All Right Reserved.
Back to top