The Coma rocket has taken off. Second yesterday, the title holder has put some distance between himself and his main rivals for victory, starting with Cyril Despres, who is 2’52” behind in the general standings. 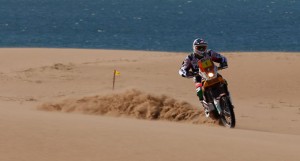 It is almost a different sport. With 295 kilometres covered in the special stage for the bikes, the gaps recorded are starting to be counted in minutes. Marc Coma, who already fired a warning shot over his rivals’ bows by putting in the second best time yesterday, did not take long to seize the opportunity to put some distance between his bike and the chasing pack. Having set of in second place behind Francisco Lopez, yesterday’s winner, the title holder won the 17th stage of his career on the Dakar, opening the road during the entire final part of the route.

Some way behind the Spaniard, a traditional confrontation with Cyril Despres fell into place. After a gentle start to the competition yesterday, he was obliged to start in 13th place. On the tracks, he overtook Olivier Pain, then Pal Anders Ullevalseter and Quinn Cody, picking up the best time at the half-way point. However, in the final sandy section over the last 50 kilometres, Coma made up for time lost and even built up a lead of 1’18” over Despres. In the general standings, he takes command with a lead of 2’30” over Francisco Lopez.

The provisional podium is completed by Despres, who nonetheless lags behind Coma by 2’52”. On this Dakar, third place on the stages seems to be reserved for surprise packages. After Pizzolito yesterday, it was the turn of Joan Barreda to do combat with the masters in the discipline, finishing 2’33” behind Coma on the stage. The Spaniard, who in particular won two stages on the recent Rally of Morocco, is perhaps following in the tyre-tracks of his elder countryman. In fact, the Husqvarna rider was born in Castellon, a town that has welcomed stages of the Dakar three times. 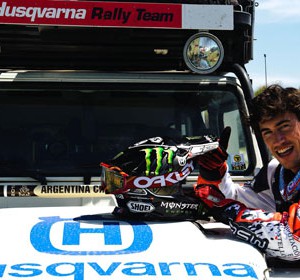 Joan Barreda, on his HUSQVARNA 450 RR by SPEEDBRAIN, starts the special into the 6th position, being placed immediately among...
Copyright 2011-2016 Rallyraid.net - RISE Network. All Right Reserved.
Back to top