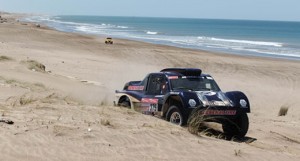 Dakar Rally has typically started with WRC-style gravel roads since moving to South America, but this year the ASO course designers headed straight for the coastal dunes at Necochea for a 57 kilometer special stage to start the 2012 rally.  Darren Skilton finished just one second behind 2010 champion Nasser Al-Attiyah and 9:51 behind the lead car when the times were tallied.  “To be honest the size of the dunes took me by surprise,” Skilton admitted.  “Skyler (Gambrell- Skilton’s navigator) and I just aired down the General Grabbers and had no problems staying on top of the sand.”  Then with the long liaison Skilton aired the Grabbers back up and made his way to Santa Rosa de la Pampa in comfort. 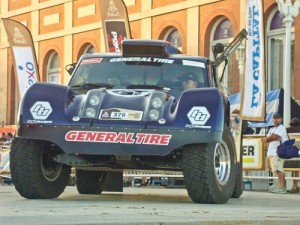 Now that the first stage is under the tires, Skilton is pleased.  “I am very happy with my team composition and how my car performed.  A strong start builds confidence and allows us to save our energy for the challenges that await.”  Stage 2 brings another long liaison to Nihuil, where Skilton and Gambrell will race through even larger sand dunes in Nihuil.  These black dunes were the demise of Nasser Al-Attiyah in 2009 and pose an even bigger challenge than those on the first stage.  “While my Revolution VI is only two-wheel drive, the floatation offered by the General Grabbers when aired down on the Method beadlocks gives us an advantage over the restricted four-wheel drive cars.”

Cyril Despres moves up from 12th to third 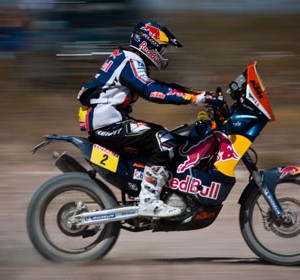