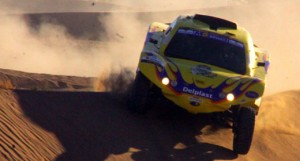 Lethargic but alert, the camp was stirring well before first light, but I was up this morning so early that the coffee wasn’t even ready… But instead of being bundled into the minivan I got lift in the chase car of the Belgorod Offroad Team, the guys who kindly fixed my Kombat for me back in St Cyprien… so I guess missing the coffee was a worthy sacrifice.

About 5km in from the start of the stage we parked up and disturbed a camel herder who stood in amazement (but not with any concern for his camels that were grazing on the track) as the bikes went by… andthen the cars. As I shook his dusty hand, which he then rose to his lips to kiss, I wondered how strange it is that to two totally different lives can cross sometimes… and it was the same with the towns that the support convoy drove through. Half million dollar trucks cruised through mud-brick villages where civilisation seems to have extended no further than breeze-blocks and phone lines. And the darling little cherubs who rushed to the roadside to wave, showed their appreciation by pelting us with stones… 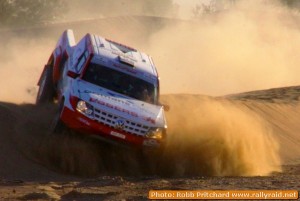 It took us 9 hours on winding Moroccan ‘B’ roads to cover the 660km to camp and I spent a few minutes stretching my aching back and stiff knees… but found the drivers who’d just covered a massive 414km standing around like they’d just been for a Sunday drive. “So how was today,” I asked Jacques Loomans who was standing next to his Overdrive Amarok. “Well,” he shrugged. “Quite pleasant…” He was behind the wheel racing for nearly 5 ½ hours, as fast as he dared for every meter… on a track that was blind! (No pacenotes in rally-raid, only logbooks). “Well, we had 2 punctures,” he added when I pressed him for details. “We had 2 in 10km and if it wasn’t for that we would have won the stage. But you know, when you are in such a huge event you are focused on one stage at a time. It’s only when you have finished or have retired that the stories start…” 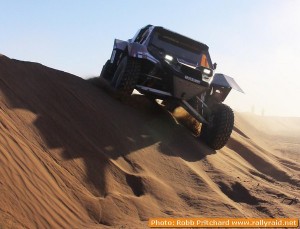 Over in the blue corner Jean-Louis Schlesser was equally bereft of adjectives for the day. “We opened the road all through the dunes but then had a puncture, so afterwards we took it easy… but not like we were drivig like tourists… I mean as much to the limit as possible without the risk of getting another flat.” When the wheels don’t get bashed off the car by hitting huge rock Russia’s Sergei Savenko in his self-built buggy is quick, but again, all his co-driver Denis Maltev could say was, “Easy,” as he shrugged his shoulders and smiled. “We were just watching the cars ahead, being careful… but we did make a few mistakes.” I asked about why the mechanics were doing so much work on the car, but another shrug is all I got. “It’s just the plan,” he answered. “Routine maintence.” 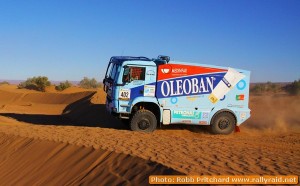 Elisabeta Jacinto wasn’t too happy with the day though as her dire predictions of what the sand would do to her truck came true. A mechanic shook her tent for me and she stuck her head out to talk. “I drove well,” she sighed. “On the normal, fast tracks I think I drove really fast, but then we lost an hour when we got stuck over a sand dune. Next year I will change the position of the fuel tanks so they are higher up. That’s what got us stuck. And then we had a tyre
explode… so not so great today.”

And then I found the stage winner Regis Delahaye chatting to a group of riders on the cushions in the semi-circle of Bedouin tents. “How did you win?” was my first question. “I have no idea,” he smiled.“Especially as we lost 25 minutes in the dunes when we got stuck. But then near the end we saw Schlesser fixing his tyre… and then a few km further we passed Loomens and were quite happy about it!”

Tomorrow the route takes us into Western Sahara for a ‘short’ 290km special, but right now the activity seems to be more focused on the New Year party. Some service trucks have fairy lights draped over them and the Russians are wondering where they can get enough beer from… And if I may take this opportunity to wish everyone who reads this a great party and a magic 2012. For me, 2011 has been amazing, so I can’t even imagine what 2012 will be like. But as long as it’s full of mud, sand and dust and I have my camera in my hand… and I’m not too far away from Sarah Sukerman, I’ll be happy! See you all next year! 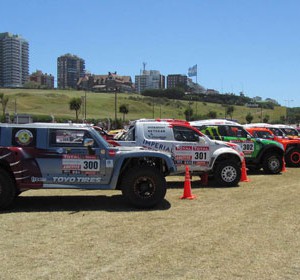 443 vehicles will take part in the 2012 Dakar, which will start from Mar del Plata and head towards Lima, where the pilots...
Copyright 2011-2016 Rallyraid.net - RISE Network. All Right Reserved.
Back to top