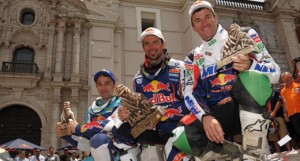 Red Bull KTM factory rider Cyril Despres on Sunday rode into Lima in triumph to seal his fourth career Dakar title and to present KTM with its eleventh consecutive win in this, the toughest event on the annual motorsports calendar.

His KTM teammate Marc Coma finished second overall in what was one of the most epic two-way battles in the rally’s history.

KTM has now won the motorcycle division of the Dakar rally every year since 2001, with the exception of 2008 when it was canceled because of security threats. In the 2012 edition, eight of the top 10 finishers and 15 of the top 20 rode KTM machines underlining the dominance of the Austrian brand’s sports bikes.

The race was a personal triumph for French-born Despres who first won in 2005 and repeated the victory in 2007, 2010 and again in 2012. His KTM factory teammate Marc Coma, who won the rally in 2006, 2009 and 2011 finished second after one of the Dakar’s most historic and closely fought battles. Both riders set the scene for a two-way competition right from the first stage and remained minutes apart until the penultimate stage on Saturday. Coma won five stages in the 2012 edition and Despres four but it was the turn of the Frenchman to ride in triumph into Lima.

Cyril Despres: Today we won and it’s simply fantastic. This is without a shadow of a doubt the toughest Dakar I’ve ever raced in. It was difficult physically, but even more psychologically. Challenging yourself every morning and fighting on the course takes its toll on your mind. It’s not like a 42-kilometer marathon; here, you have to earn your place every morning. All victories are beautiful, but this one is special because it came down to the wire and was decided at the last minute. This was an unimaginable scenario, with the leaders separated by mere seconds. I’ve done 90 or 85 rallies throughout my life, and this one was the one where I had to fight the hardest. Today will leave its mark on me.”

The final stage from Pisco to Lima was largely ceremonial with a 254 km liaison section along the Pacific coastline of southern Peru and a brief 29 km timed special, a final encounter with the coastal dunes in the middle of the liaison section. Riders started in reverse order for the final stage that completed this marathon, almost 9,000 km ride from Mar del Plata in Argentina to Lima. Along the way they encountered vastly different terrain ranging from the Argentinean pampas to the high Andes, the daunting Atacama Desert of Chile and finally the southern coastal plains and rios of Peru. It was the first time that the rally had included Peru and the first time it represented a dash from the Atlantic coastline to the Pacific

The last timed special went to Pal Anders Ullevalseter of Norway (KTM) who finished ahead of Coma in second place. Despres, who said after the penultimate stage that the effort to stay ahead of Coma had cost a huge amount of physical and mental energy coasted home in tenth place.

Only minutes had separated the two KTM leaders going into the penultimate stage and the competition was fierce. Since the beginning of the rally both riders had never let up in speed and determination. But in the heat of the battle on Friday, Coma made a huge jump on the bike and when he landed he knew he had gearbox problems. He nursed the bike back to the bivouac but also made a navigational error in the process and this was enough to give his rival the lead he needed.

A new Dakar rule in 2012 penalizes riders 15 minutes for the first change of engines and 45 minutes for the second. As the factory team had decided to change out both engines in the lead riders bikes one stage into the second half of the rally this meant that when Coma’s engine was changed a second time he was given another 45 minutes penalty, effectively handing the title to his teammate.

Alex Doringer, Team Manager for KTM’s factory team said he was delighted that his top two riders had taken first and second place. “The battle between them was amazing,” he said from the finish in Lima, adding the team was also very happy that Johnny Aubert from the KTM Enduro Factory Team finished in overall fourteenth place in his rookie Dakar ride. Johnny rode a standard series model KTM 450 Rally Replica and went into the rally with a mission to learn and enjoy.

KTM’s motorsports expert Heinz Kinigadner, himself a former Dakar rider said it was a great day for the company. “This battle between Cyril Despres and Marc Coma was one of the tightest and one of the most interesting in the history of the rally. They were virtually wheel on wheel in almost every stage. They both gave everything both physically and mentally and they both deserve to go into the Dakar record books for this great effort. It is naturally unfortunate that Marc had some gearbox problems in the penultimate stage and picked up a 45-minute penalty for the engine change. Otherwise their times at the finish line would have been only minutes apart.”

White Hills Baja Russia from the 23rd till 26th February 2012 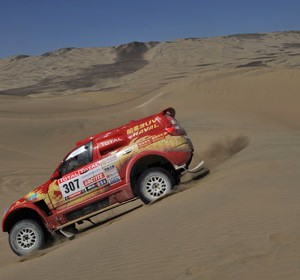 It was the end of the 33rd edition of the longest and most difficult rally in the world. After 15 days of race and almost...
Copyright 2011-2016 Rallyraid.net - RISE Network. All Right Reserved.
Back to top