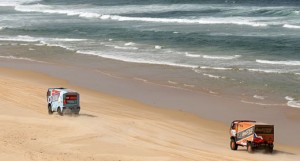 Today Elisabete Jacinto finished her part in Africa Eco Race 2012 driving her MAN TGS to the finishing line at the mythical Lac Rose, in Dakar. Together with the also Portuguese José Marques and Marco Cochinho, the driver accomplished today the special without consequences in the classification which was run around Lac Rose, also in 2nd place among trucks and with the 4th best time in the joint car/truck classification, exactly the same result she had obtained at the end of 10 days on competition.

This morning, by Lac Rose, the starts on the beach were simultaneous for groups of five competitors each. Elisabete Jacinto was on the first group, where there was also Jean-Louis Schlesser, the absolute winner; though she had the best start, the Team Oleoban/MAN Portugal driver finished in 4th place, having competed to the end with the Czech Tomecek’s Tatra. Both trucks led a thrilling duel till the finishing line, with both heavy-weights only three seconds apart.

“It was utterly exciting. At the beach, we managed to start ahead, but then Tomecek overtook us. We followed through the dust, right on the tail of the Tatra, but it was impossible to overtake. It was a beautiful end for a stupendous competition, with a course faultlessly chosen by René Metge, and where our team excelled itself once more. The reckoning is extremely positive, and we leave here with an enormous wish to keep evolving, so that we may behave even better and win more. Africa is always a fabulous continent for cross-country races, and we keep betting on it”, mentioned Elisabete Jacinto after the end of Lac Rose special and her stepping to the podium. 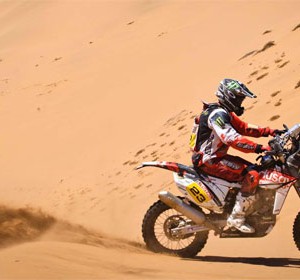 How have you seen the first steps? Many situations that were unaware? Find new things every day, and more in a race like...
Copyright 2011-2016 Rallyraid.net - RISE Network. All Right Reserved.
Back to top