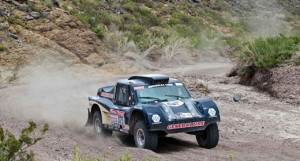 After a strong finish on the first short special, Darren Skilton made the long liaison to Santa Rosa de la Pampa.  The second day of the Dakar Rally started with another long drive, including deep silt beds and square ledges… and that was just on the liaison!  When the 290 kilometer special stage started, initially Skilton was able to run his car wide open on the loose gravel roads.  “The V8 engine and X-Trac transmission allows me to reach speeds over 120 miles per hour in the right conditions,” Skilton shared.  Unfortunately the conditions deteriorated as the stage went on, culminating in the dreaded Nihuil dunes.  Fuel delivery issues in the scorching heat of the black sand brought the Revolution VI buggy to a halt on multiple occasions, giving up valuable time to the lead cars.  “We had to pour our water onto the fuel pump whenever the problem surfaced,” explained navigator Skyler Gambrell.

The team also lost a wheel off the vehicle late in the special stage, costing even more time.  Sounds bad?  The black volcanic sand dunes ended the aspirations of Carlos Sainz and Stéphane Peterhansel in 2009, when both rolled in this same area.  “I have driven the Dakar Rally enough to know not to get rattled this early in the race,” Skilton stated.  “Skyler and I were able to complete the stage without harming the car and I am confident my crew will have the fuel delivery problems sorted by morning.”  The third stage of the rally travels on fast gravel roads through the Argentine wine region of Mendoza on its way to San Juan, providing Skilton with another opportunity to uncork his Redline Performance engine 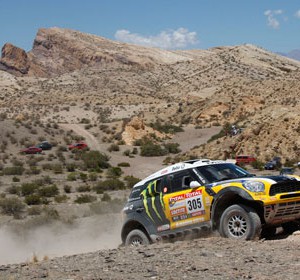 Despres, already a winner in San Juan on the Dakar's last visit in 2010, won again today, taking advantage of a major navigational...
Copyright 2011-2016 Rallyraid.net - RISE Network. All Right Reserved.
Back to top