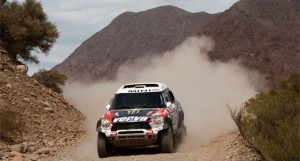 Today’s special stage began 25 kilometres later than scheduled as torrential rain had destroyed parts of the track. And the rain also made an impact on the Dunes. The wet sand was firmer and – consequently – easier to drive on.

For Krzysztof Holowczyc, it was the first Dakar special-stage win as Team X-raid driver. The Pole was among the front runners right from the start, took the lead with just a few more kilometres to go – and defended it until having crossed the finish line. “I’m truly delighted with having won today,” beamed the 49-year old. “Yesterday, I wasn’t too happy with my performance but today, everything was perfect.”

Stéphane Peterhansel had to cope with a difficult task. Having won yesterday’s special stage, he was the first driver who had to go out today. A clear disadvantage in the dunes and the sand of Fiambala. “In addition, the motorbikes took another route and so I had absolutely nothing I could use as orientation – while the others had me,” said Peterhansel. “Therefore, I’m absolutely happy with the result.” After all, he still holds the overall lead, with Holowczyc and Roma following in second and third positions respectively.

For the Spaniard and his navigator, Michel Périn, the special stage at Fiambala had a special significance. Here, an accident forced them into early retirement, two years ago. “I’m really happy to be here,” said Roma. “Due to the accident in 2010, I certainly was slightly more careful than usually but it was our top priority to survive the special stage.”

Novitskiy and Dos Santos completed the outstanding team result of the Monster Energy X-raid Team. The Russian wasn’t too happy about the firm sand. ”I prefer driving on soft sand,” he admitted. “Due to today’s conditions the special stage lost a part of its charm. The Portuguese pairing experienced a trouble-free special stage.

Chilean-French pairing Boris Garafulic / Gilles Picard also delivered in fine style and finished 17th, with their German team-mates Stephan Schott and Holm Schmidt coming 20th. “We once again took it easy today,” said Schott. “Consequently, we hadn’t to cope with punctures or other problems that would have cost us time.” The Russian squad Duo Alexander Mironenko / Sergey Lebedev, however, lost 40 minutes by getting stuck in the sand.

Tomorrow, the entire rally baggage will drive across the Andes to Copiapo, Chile. Following a 394-kilometre liaison section, the 274-kilometre special stage takes the competitors right to the bivouac. At the beginning, the drivers will have the chance of going fast on a firm track but then, it’s back into the Dunes – this time the ones of of Copiapo. 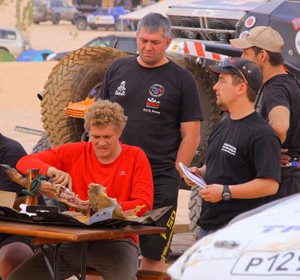 Desert racers are a hardy bunch and those that take on the challenge of the Africa Eco Race from the south of France to Dakar...
Copyright 2011-2016 Rallyraid.net - RISE Network. All Right Reserved.
Back to top