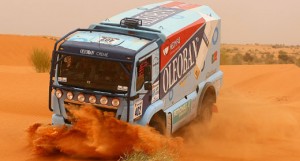 Driving a MAN TGS, the Portuguese Elisabete Jacinto, together with her fellow Portuguese José Marques and Marco Cochinho, attained at Africa Eco Race 2012 a brilliant 2nd place among trucks and a remarkable 4th place in the joint car/truck general classification.

The MAN TGS driven by Elisabete Jacinto also entered cross-country history when it won the absolute victory in the 9th streak. It was the second time a truck beat cars, but it was the first triumph obtained by a lady, and also by a MAN. A victory all the more meritorious due to the fact that it was conquered in direct confrontation with the Buggy driven by Jean-Louis Schlesser and navigated by the experienced former world champion Cyril Esquirol.

“There is a very positive balance for our third entry in Africa Eco Race. The result attained comes from a symbiosis among driving, navigation, mechanics and logistics. I recognize I drove consistently well, but the merit also belongs to an excellent team and a stupendous joint work. The race was super, the competition was well organized, and now we only have to examine some aspects, perfectly identified and which imply deep changes in some of our MAN TGS structural components; the truck had impressive performances at most steaks and, with those changes, we may aim at even better results” stressed the Team Oleoban / MAN Portugal driver when she arrived in Dakar.

At the end of the race, there was the mythical Lac Rose special, where the MAN driven by Elisabete Jacinto started in the first group, together with Jean-Louis Schlesser’s Buggy, the absolute winner of the rally, and the Czech Tomecek’s Tatra. Both trucks lead a thrilling duel which only ended at the finishing line, with the two heavy-weights merely three seconds apart. 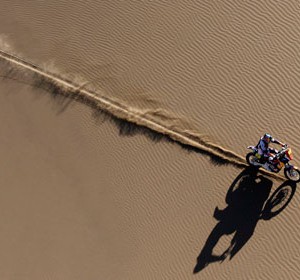