After five days of race, the adverse weather conditions on the Andes Mountain Range, especially passing through the Paso de San Francisco, over 4.700 meters high, forced the Organization to cancel, first thing in the morning, the sixth stage of the Dakar 2012, from Fiambalá in Argentina to Copiapó in Chile. 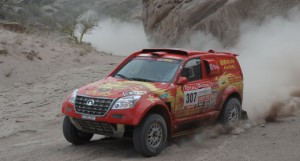 The stage of more than 600 km, changed at km 314 to avoid passing through the Paso de San Francisco, was accomplished by a convoy of all vehicles. Among them was Carlos Sousa, who is already considered one of the great surprises of the car race, placing the rookie SUV Haval of the Chinese Team Great Wall Motors in the seventh position overall, a little more than 40 minutes behind the leader Stéphane Peterhansel and less than 10 minutes behind Leonid Novitskiy, who is sixth overall.

During a break between breakfast and the departure towards Copiapó, where the stage will start tomorrow, Carlos Sousa talked about the compliments he has been receiving from the managers of Great Wall, about the curiosity and interest aroused by most of the international media, but also about the flu that affected him on the last few days, the lack of tests with the SUV Haval and, of course, his expectations for the rest of the competition.

“For now I think the race is going very well, concerning the outlined expectations, because we are regularly driving within the top-10 and among the main outsiders, considering that the MINI seem to be unbeatable …”, affirms the Portuguese driver in his debut year for the Chinese Team Great Wall Motors.

“Considering that I have not competed since last April, I think we started very well – sixth place in the opening stage –, although the two following days were characterized by a succession of little problems, such as flat tires, a door that was constantly opening and even an annoying flu which hindered me physically and only now seems to be disappearing”, recalls the best Portuguese car driver placed in seventh overall. 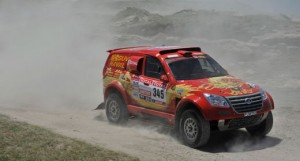 “Of course I wanted more, but considering the fact that this project is very recent the limitations of the team, we have to be realistic and say that this is the best possible result at this point”, realizes Carlos Sousa, admitting the lack of tests with the SUV Haval before the Dakar: “The car is competitive and has a great engine. But to go further more tests would be necessary and probably also another race before the Dakar, as it was initially scheduled. Since that wasn’t possible many set-ups have been made here, stage after stage”, explains the driver, confessing some difficulties to find the best set-up of the SUV Haval.

“I still feel the car a little bouncy and the rear end is always loose. The problem is that if we constrain it too much, the temperature of the tires will be too high. Well, it is something we have to learn how to deal with, as well as the problem with the engine cooling, which delayed my team mate Zhou (Yong) in the first stage. Sometimes, as it happened yesterday, we have to slow down and be very cautious not to overstep the line”, he clarifies.

Anyway, despite all these limitations, the managers of the Great Wall don’t stop praising the Portuguese driver’s performance: “They have been following the race from China and even today they told me they are extremely satisfied with the result, which is far beyond the team’s expectations. And they ask me not to take risks, this is already very good and they prefer that I maintain this position than attack harder… But of course it is difficult to get to this position and just keep it until the end! I always want more and I won’t give up the chance of gaining any position. But I also realize that, at this point, considering the competitiveness of the other cars, this can only happen if the cars ahead of me have any problem”, affirms Carlos Sousa, whose experience and consistency allowed him to finish 11 from 12 participations in the Dakar.
“Before this competition I was in China and was welcomed by the president of the company ,who wanted to make sure that the result is not the most important aspect and that they are more concerned with the safety rather than with a historic result. It is a very responsible attitude, which is also very realist, considering the limitations of this participation. Of course we, drivers, always want more and more. And that is what we are trying to achieve, by balancing our ambition and the interests of the Great Wall. From this point of view, I think we are in the right path. Zhou (Yong) himself after the delay in the opening stage, has been recovering positions day after day and even yesterday he was one of the 20 fastest drivers in the stage”, pointed out the Portuguese driver at the end of the first third of the race.

The seventh stage tomorrow will start and finish in Copiapó in a total of 598 km from which 444 will be a special stage.
According to the Organization, it will be one of the toughest stages in this Dakar, especially when the drivers cross the great dune chain of Copiapó. For some reason, vehicles are allowed to arrive to the camping place until 6 o´clock p.m. on the rest day (Sunday). 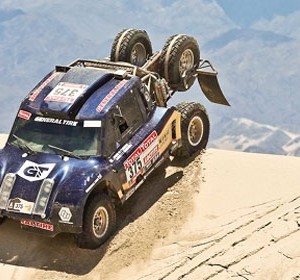 On the road to Chilecito on Wednesday, Darren Skilton had to battle for every kilometer on Stage 4 of the Dakar Rally. “The...
Copyright 2011-2016 Rallyraid.net - RISE Network. All Right Reserved.
Back to top