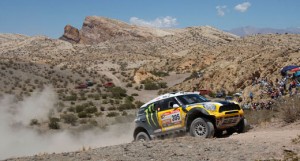 In the third special stage – from San Rafael to San Juan – the Monster Energy X-raid Team celebrated a one-two. Spanish-French pairing Duo Nani Roma / Michel Périn set the fastest time of the day, in their yellow Monster Energy MINI ALL4 Racing, with their team-mate Krzysztof Holowczyc (Poland) and his Belgian co-driver Jean-Marc Fortin in the ORLEN MINI ALL4 Racing coming second. Thanks to this second place, the Pole also took the lead in the overall rankings. Third position was secured by Robby Gordon. Due to two punctures, the two Frenchmen Stéphane Peterhansel and Jean-Paul Cottret had to settle for coming seventh while Russia’s Leonid Novitskiy and his German navigator Andi Schulz finished ninth. 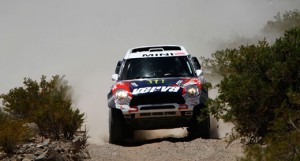 Right after having crossed the finish line in San Juan, with his yellow MINI ALL4 Racing, special-stage winner Roma was surrounded by numerous journalists. And although the winner was happy to have secured this win, he was even more delighted for his mechanics. “This win is a nice success for the team,” beamed the Spaniard. “And yes, I’m happy to have won this special stage. Nonetheless, I’m fully focused on Lima.” The 39-year old completed the 208-kilometre special stage without encountering any problems whatsoever.

Holowczyc, who truly enjoyed the special stage, also had a good chance of celebrating the win. “The track was technically demanding and steering the car across the rocks was big fun,” the 49-year old said with a grin. But then, he temporarily lost his way. “We were driving in the dust and took a wrong turn as the motorbikes are taking another route, there,” explained his co-driver Fortin. “Fortunately, I realised right away what had happened and we didn’t lose a lot of time.” 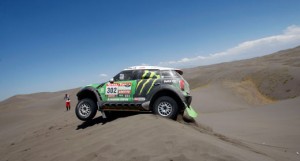 Stéphane Peterhansel dominated the early stages but later, he had to cope with a massive dose of bad luck. The Frenchman encountered two punctures and dropped back to seventh. At first a piece of wood damaged a tyre, resulting in a slow puncture and later, a stone caused the second flat tyre. “This wasn’t a good day for me,” admitted Peterhansel who now holds fifth position in the overall rankings.

Novitskiy and Schulz in their orange MINI ALL4 Racing finished two positions behind the French pairing. For them, it was an uneventful third special stage. “We drove at a speedy pace but carefully,” revealed Schultz. 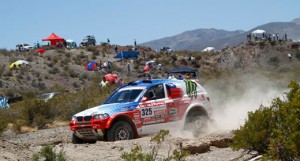 Chilean-French pairing Boris Garafulic / Gilles Picard also impressed with another good performance and finished – as things are now – 17th, with their Advisors BMW X3 CC. With just a few more kilometres to go, they tried to help Ricardo Leal dos Santos who had got stuck in the mud but at the end of the day, their effort was in vain. “The special stage was a rather tough one,” said the Chilean, “But I’m happy for Nani. This was the perfect track for him – you had to drive as if you were riding a motorbike.”

Meanwhile, Holowczyc encountered the moment of shock of the day – during a multi-minute water passage. “We drove at about 20kph and nonetheless, our vision was virtually zero. Suddenly, there was a big bang,” recalled the Pole. A thick branch hit and broke the wind screen. “At first I thought it was a stone,” he added, “But where should it have come from. Then we saw the branch.”

Tomorrow’s fourth special stage will take the Dakar competitors from San Juan to Chilecito. During the 326-kilometre special stage, they will witness outstanding landscapes. The drivers will cross seared river beds and Canyons. At the same time, the special stage also features pitfalls for both drivers and navigators. 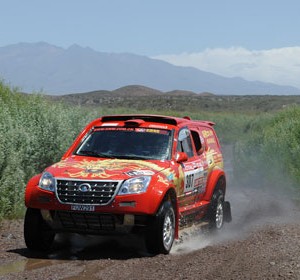 In a physically very demanding stage, which included two paths at about 3 thousand meters high, rocky tracks and several...
Copyright 2011-2016 Rallyraid.net - RISE Network. All Right Reserved.
Back to top