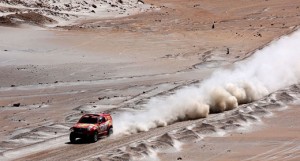 In a stage which the Organization considered to be the toughest of this Dakar, Carlos Sousa kept his yesterday’s promise, maintaining a strong pace since the first kilometers of the stage between Arequipa and Nazca, in Peru, to try to recover the sixth position overall he had lost yesterday to the Argentinian driver Lucio Alvarez.

Even though he was only the 21st car at the beginning of the 12th and antepenultimate stage of the race, behind several slower competitors, the Portuguese driver soon started to come closer to the front positions, being the fifth fastest driver in the first third of the stage, less than 2 minutes behind Robby Gordon’s Hummer.

However, Carlos Sousa’s strong pace had unexpected consequences to his co-driver, the French Jean-Pierre Garcin, who complained about strong neck and head pains, at the middle of the stage, forcing the driver of Great Wall to lower his pace drastically: “We started the stage very well, but then I had to slow down because Jean-Pierre started to feel very badly, complaining about strong neck and head pains, still caused by yesterday’s hit on the dune. For a moment, I even thought we would have to give up, but we managed to keep on going, at a much slower pace than that we were having so far, however”, said Carlos Sousa when he arrived at Nazca. 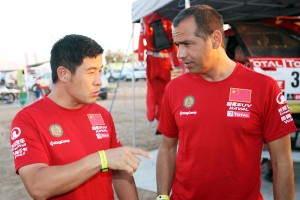 Almost with no help from his co-driver until the end of the stage, the Portuguese driver committed a navigation mistake, which cost him about 15 minutes and, worse than that, to enter the chain of dunes after some trucks: “Without navigation notes, I took the wrong turn at a crossroad and drove more than 7 km back and forth, which was enough to arrive to the dunes after the first trucks and when the sand was already very destroyed. In short, another bad day which will end at the hospital, where Jean-Pierre is going to be examined to make sure he can continue on the race”, revealed the driver, which nevertheless achieved the 10th place in the stage, about 40 minutes behind the winner.

This result was not enough to maintain the seventh place overall, which was taken by the Dutch Bernhar Tem Brinque, who was the fourth fastest driver in today’s stage. Both drivers will begin the penultimate stage separated by only four minutes.
Tomorrow, roughness is again expected in the stage between Nazca and Pisco (which is also the name of the most popular drink in Peru), in a total of 375 km, with a special stage of 257 km. Once more, the main difficulties are associated with the dunes, in an ultimate test to drivers and machines. 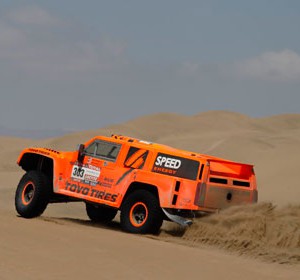 Taking advantage of the starting order today, the third man out, Marc Coma, achieved a not inconsiderably splendid performance...
Copyright 2011-2016 Rallyraid.net - RISE Network. All Right Reserved.
Back to top