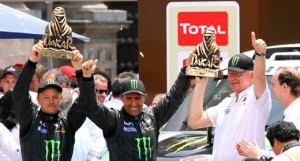 History was made today in Peru’s capital Lima: Stéphane Peterhansel celebrated his 10th Dakar win, representing at the same time the MINI ALL4 Racing’ and the X-raid Team’s first triumph in the gruelling event! Just 14 months after the unveiling of the German squad’s latest vehicle, the off-road racing crown was secured by the Trebur based team.

„We finally have achieved our long-awaited goal: our first win in the Dakar Rally,” beamed Monster Energy X-raid Team Manager Sven Quandt after Stéphane Peterhansel had rolled over the podium. “In this year’s Dakar, the MINI ALL4 Racing clearly demonstrated its outstanding potential and reliability.”

“We have worked hard and for a long time for this win,” said the Stéphane Peterhansel who now has got 10 Dakar wins under his belt. “With the MINI ALL4 Racing, we designed a competitive and reliable car. I want to thank the entire team for its hard work and support, both prior to and during the event.”

But the success story didn’t end with Peterhansel’s win, as all the five MINIs ALL4 Racing entered by the team made it to the top 10. Nani Roma (ESP) ad Michel Périn (FRA) impressed by celebrating three special-stage wins and finished runner-up, thus giving the Monster Energy X-raid Team a one-two, in the 2012 Dakar. Meanwhile, Russia’s Leonid Novitskiy and his German navigator Andi Schulz demonstrated that consistency is the right approach for being successful. They won the first special stage and afterwards, they successfully avoided getting involved in any major problems. Finishing fourth in the overall rankings represented the well-deserved reward – and the best Dakar result ever secured by a Russian driver in the Dakar’s car ranking. In addition, Novitskyi also was the best-place semi-professional driver in the 2012 edition of the event.

For a long time, Polish-Belgian pairing Krzysztof Holowczyc / Jean-Marc Fortin also proved to be a factor in the battle for a top-three position. In the 10th special stage, however, their ORLEN MINI ALL4 Racing encountered problems that cost them their chance of making it to the podium. The fifth Monster Energy X-raid Team pairing, the Portuguese Ricardo Leal dos Santos und Paulo Fiuza, completed the outstanding team success by taking their red MINI ALL4 Racing to eighth position in the overall rankings. 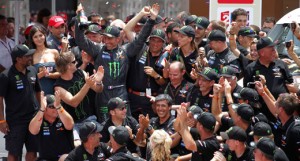 And the Monster Energy X-raid Team did not only convince by this fantastic Dakar success but also by outstanding reliability. Other than expected by many pundits, all the eight vehicles entered by the German squad – five MINIs ALL4 Racing and three BMWs X3 CC – survived the entire event and made it to the finish in Lima. “Apart from our win, this is the biggest success for our team,” added Quandt. “Our engineers and mechanics did a fantastic job preparing the cars on every single day, thus laying the foundation for this success.”

From 2011 to 2012, the number of MINIs All4 Racing contesting the Dakar increased from one to five. Coloured green, yellow, orange, red and red/blue/white, they turned the desert into a colourful place. From the very first special stage and throughout the event, the overall lead was held by one of the MINIs ALL4 Racing that also secured eight special-stage wins. 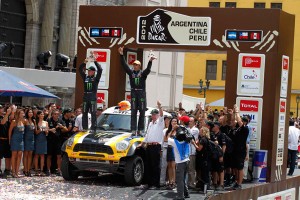 Dakar record winner Peterhansel switched to Team x-raid following the 2009 Dakar. Up to that point in time, Mr. Dakar had celebrated 6 motorbike wins (1991, 1992, 1993, 1995, 1997, 1998) and three on four wheels (2004, 2005, 2007), in the legendary event. Now, by his first win in South America, he added triumph No 10 – by delivering in his well-know style. Peterhansel celebrated three special stage wins in this year’s Dakar and convinced – as usual – by consistency and a matured style of driving. Thanks to this approach, he avoided getting involved in any major problems and on day three, he took the lead for the second time to defend it until the rally was over.

For the Frenchman who was born on 06th August, 1965, in Vesoul, competing has been vital throughout his life. To get involved in sports just for the fun of it is an alien concept, to him. As juvenile, for instance, he was French Skateboard Champion – to then fully focus on the enduro sport. And again, he didn’t have to wait long for his first successes. Contesting the Dakar Rally represented a long-time dream for him – and in 1988, he made this dream come true.

The MINI ALL4 Racing made its Dakar debut in the 2011 edition of the gruelling event – in that year with the French pairing Guerlain Chicherit / Michel Périn in the cockpit. The small rally car quickly captured the hearts of the motor-racing enthusiasts but a crash during the roll-out on the day of rest of the 2011 Dakar forced the car into early retirement. But just a few weeks later, in spring 2011, Peterhansel and Cottret secured the first win of the MINI ALL4 Racing – in the Abu Dhabi Desert Challenge. In this event, their car still featured the classic red livery but from the Silk Way Rally, Peterhansel / Cottret raced the green MINI ALL4 Racing that soon should become their trade mark.

Chilean-French pairing Boris Garafulic / Gilles Picard made for a major surprise in the 2012 Dakar. While Picard was one of the most experienced co-drivers in the field, Garafulic contested his only second Dakar. Nonetheless, he made it to the top 10 in several special stages and in the end, he secured 12th position in the overall rankings, with the two Russians Alexander Mironenko and Sergy Lebedev taking their BUER BMW X3 CC to 16th position.

German pairing Stephan Schott and Holm Schmidt had to cope with a huge dose of bad luck, with their KS Tools BMW X3 CC. Incidents caused by rocks and opponents prevented them from securing a better result. At the end of the day, they had to settle for finishing 31th.

Now, the rally vehicles and the service fleet will be shipped back to Germany. In the coming days, a cargo ship will take them back to Europe where they will arrive around mid- to late February. And just a short time later, it’s back to business in the kick-off of the new FIA Cross-Country Rally World Cup season. 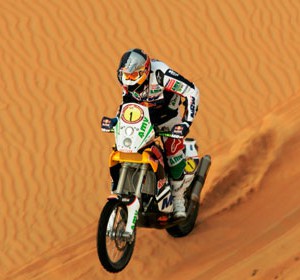 The Abu Dhabi Desert Challenge will return for its 22ndrunning in 2012, and will once again be held across the Emirate of Abu Dhabi...
Copyright 2011-2016 Rallyraid.net - RISE Network. All Right Reserved.
Back to top