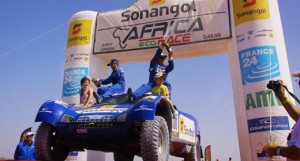 It was 2 weeks ago when, clean-shaven, we all met in St Cyprien, a few familiar faces in the crowd of strangers. Now through Spain, the freezing mountains of Morocco, the plateaus of Western Sahara, wastes of Mauritania and funny trees of Senegal the people I’ve seen crawl from their cars, bash them back into shape with hammers, serve dinner, write press releases until late at night and stand in attendant semi-circles to listen to the briefings; these people have become like
family.

It’s not just a need for speed and the love of dust and sand that has drawn the eclectic (and I dare say somewhat eccentric) group together, the Africa Eco race is more than that… it follows in the spiritual wheel tracks of Thierry Sabine, legendary founder of the original Paris-Dakar. He didn’t go to South America to search a route for what became one of the world’s toughest tests of man and machine. No, he came to where I am standing now, at the shore of lake with a slight pinkish tinge to it just inland from the Atlantic Ocean.

It was only a short dash today, a 23km blast along the beach and around the Pink Lake, a little traditional and light-hearted fun for those who have made it all the way from the south of France the day after Christmas to the Senagalese capital. Jean-Louis Schlesser led the parade over the finish ramp and few would have bet against him, but from the start it was a faultless drive. Don’t forget he was in a brand new car with an untried co-driver and still he didn’t hardly put a wheel wrong.

Delighted with taking the runner’s up spot was Tomas Tomecek in his TATRA truck. Don’t think of it as a service barge trundling along the plains… think more an 8 tonne Group B rally car… and with it’s huge tyres and engine with massive amount of torque it has a big advantage over the cars in the soft sand. “I need to say thank you to the organisers,” he said. “It was a very hard race, but in these difficult times that have made this wonderful rally and now really, it’s good enough to be able to choose between the South America Dakar and the Eco Race… and for me Eco Race is the best choice!”

Taking a very popular 3rd overall (and second in the car category) is Jacques Loomans in his Overdrive Amarok and winners of the T2 class for production based cars (and 8th overall) is the furthest travelled team, Maxim Kirpilev and Vadim Shmaylov from the snowy lands of Russia. “We really love this rally. We weren’t aiming to win, but the car was good and we kept pushing and the win came. The most important thing is having a great time with your friends, and we did! Also, it’s good to see this event growing. It has the potential to be really big.”

In a close call for the title of nicest person in a set of racing overalls with Mr Schlesser, Elisabeta Jacinto was also full of praise for Rene Metge and his team. “I like this rally very much. It’s well organised and has the type of SS that we like, long and hard so for sure we will be back next year.”

And for me… That last blast along the beach… it was done with a real sense of achievement as well as history, even if it was a bit hairy at 130km/h in an overloaded Russian Nissan Patrol. For so long I’ve been pushing on and on with such long days that it seems strange that it is all over. The near forgotten luxury of a hot shower and fumbling with hotel key cards rather than finding a dusty spot on the floor to sleep… It’s more for the competitors to thank Rene Metge for making a perfect course (I honestly didn’t hear a bad word) but for me, my gratitude is to the Belgorod Offroad team from driving me all the way down from Morocco to Dakar and out into the stages.

It was an absolutely amazing trip from start to finish…

Full results can be found at
http://www.africarace-live.com/ 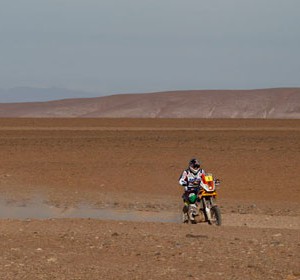 Despite being the first rider on the course, Marc Coma managed to avoid the muddy trap which later caught Cyril Despres....
Copyright 2011-2016 Rallyraid.net - RISE Network. All Right Reserved.
Back to top