I grew up in Europe so can’t help assuming that over the next ridge there will be a fence and some fields or a little village. My mind just can’t comprehend the absolute vastness of he Sahara, and only from the air can it be full appreciated. It was my turn in the helicopter again and after a quick circle of the camp we were high enough to see the wilderness stretched out before us. Like the scaled-up ripples you see when you’re standing on the ground arcs and arms of dunes spread out, interspersed with small spindly trees, shorts bushes and tufts of grass. It’s definitely greener than a few days ago, but still no where near being able to support more life than a few random goat herders.

Over the last week and a half I’ve become quite used to seeing the blue buggy of Jean-Louis Schlesser out front in a class of its ow so it was a bit of a surprise to see the TATRA truck of Tomas Tomecek bouncing over the dunes first, ahead of everyone else. The heroine of the last stage Elisabeta Jacinto was struggling on just the very first sandy slope… 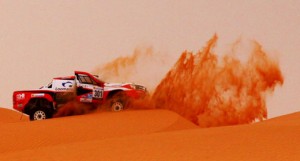 Several times Jacques Loomans has mentioned that his engine is a bit too aggressive for the dunes and this morning I saw what he meant. The was a dune that had a big drop off on the far side and when he saw it he braked hard, digging the front wheels in. The normal technique is to gently reverse but Loomans span the wheels kicking up a massive plume of dust that sank him straight down to the axles. Hos co-driver had to get out and start digging and a few minutes later they were on their way again. Schlesser was even more circumspect and came to a complete stop  before the drop and made co-driver Cyril Esquirol get out to run ahead… so cautiously was the ‘Boss’ going that Sergei Savenko had caught up with him from last place… But going the opposite way, from first to last, was Elisabeta Jacinto who was stuck in what didn’t look to be such a hard pace for about 45 minutes.

Going well, at least at the start was Jean Noel Julien in the MD Rallye Megane. I like this car as it looks a bit like Ari Vatanen’s Peugeot 206 T16 that he raced to glory somewhere close to these very sands 25 years ago.

We flew again and landed t a series of hard jumps as the track went down into a plain. I’ve seen how well the TATRA bounces over bumps but watching it blast along a dry lake bed was something special.. Our next stop was CP3. Tomecek was still the overall leader but Schlesser had managed to make up a lot of time. Earier I though that he was just ambling along conserving his 2 ½ hour lead, but actually I don’t know it he can drive slowly. Loomans was doing well, but Savenko had disappeared and it was the two Russians in the T2 class getting their carnet stamped… and behind them Jacinto was on a mission, getting her MAN sideways before the checkpoint. The heavily armed Mauritanian desert patrol were driving around and insisted that we had our photos taken with them  and then we headed off to the finish where
there was an obvious sense of relief and accomplishment on the far side of the time control, Tomecek was dancing with his support crew and there were a few others jumping with joy. But this event is a lot diffferent to other desert rally-raids I’ve been to. It’s not just a blast around in the sand, the Africa Eco Race is a rally, but it also has an aim, a destination, and one etched into legend. It isn’t over until the all the surviving crews make it to Dakar… 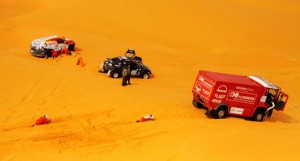 But for us the day wasn’t quite over. We flew over the incredible sight of Nouachott, it’s lines of cuboid buildings stretching out into the haze, into the airport to get out exit stamp and then we did something amazing…. we flew down the Atlantic coast chasing fishing boats and skipping over flocks of seagulls, the surf breaking just a few metres below us. The campsite is different tonight as well. Gone is the barren desert and the trucks and tents are in among strangely
thick trunked trees and on the other side of the road is a line of hawkers selling souvenirs.

It’s already late, but there is another border crossing and a 400km road section on what looked like a very bad road, so the camp is still empty. Tomorrow in Dakar I will get all the comments from the drivers…

Jacques Loomans took today’s stage but it was close at the top with Tomas Tomecek 8 minutes back and  Jean-Louis Schlesser a further 90 seconds behind the TATRA. Tomorrow’s short stage on the beach has for some reason been neutralised, although all teams must complete it to be classified, but in 24 hours we’ll all be in Dakar. There will be
winners, there will be survivors as well as those just happy to make it. And somewhere in the crowd will be a Welsh journalist finally living a boyhood dream. 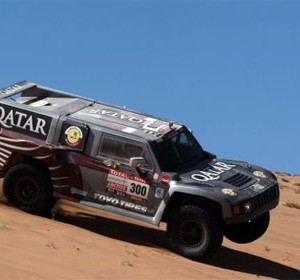 Things are getting tight at the top of the motorcycle classification: Marc Coma seized his third career victory in Copiapó...
Copyright 2011-2016 Rallyraid.net - RISE Network. All Right Reserved.
Back to top