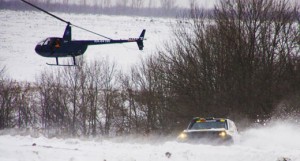 Images of a a bright-orange Hummer chasing a pea-green Mini across the South American landscape are still fresh in our minds but now it’s time for the 2012 FIA World Cup for Cross Country Rallies. March in Italy will see crews come together for the first round of a championship that will take them so some of the world’s toughest rally-raid events, which this year includes the UAE, Qatar, Tunisia, Morocco, Spain, Hungary, Poland, Egypt and Portugal. But the first race of the year is not in the dust or sand, but the frozen landscape of Russia. The White Hills Russian Baja is a candidate event vying for full inclusion into the 2013 calendar and is the only truly winter event.

The race is organised by the Belgorod Off-Road Team, who for those that followed my Africa Eco Race reports, were the ones who kindly drove me through Africa in their chase car. Based in a motorsport centre called Virage a 115km stage ploughed out through the rolling hills outside the city of Belgorod will be run 3 times making a 345km event, with short super-specials at the beginning and the end. 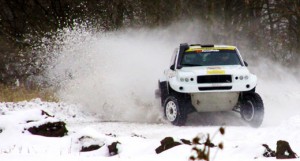 No foreigners have braved the infamous Russian winter but although F1 has Vitaly Petrov and Evgeni Novikov is impressing in the WRC it’s rally-raid that Russian drivers really seem to excel in. Finns are famous in rallying because they are used to the speed of the roads in their native forests and some joke that maybe the Russians are good at rally-raid because they are used to their terrible state of their roads. Leonid Novitsky in an X-Raid BMW X3CC won the 2011 FIA World Cup and two-time Baja Championship winner Boris Gadasin was 3rd in hisself-built G-Force Proto. Russia also took the Production Cup trophy as Ilya Kuznetzov dominated the T2 class in his Toyota Land Cruiser. It might be a local event but the field is full of quality with ex-Russian champions and Dakar drivers… 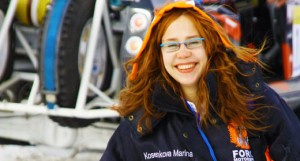 The first Super-Special was a 3km long slither around a rally school training circuit which is part of the Virage motorsport complex. A few days ago it was -20 but today it’s a balmy -4, which for me is still damn cold, especially when the wind is blowing the snowstorm sideways with such a force that it stings my face. I was worried about pneumonia but the Russians said that spring must be coming soon…

Last year a new name popped up on timesheets as Vladimir Vasiliev drove some giant killing performances, leading the Pharoans Rally on his first sand-based event and winning a stage of the Silk Way Rally and he was first away in his monstrous 7 litre V8 G-Force Proto. His team mate is experienced driver Victor Volikov, stepping up from T2 to the top class and it was interesting to see how the two different drivers tackled the stage. Vasiliev tore around attacking every corner and widening the course here and there as he slid into the snow banks and powered out of them sending the snow almost as high as the following helicopter while Voikov, co-driven by his son Anatoli, drove much more precisely, sliding the car around between the banks instead of through them. I was standing next to team leader Boris Gadasin and
over the wind he said, “Victor is faster,” and he was right. Victor beat Vladimir by 3 seconds. It was also a good opportunity to ask him what is new on the cars for 2012. “Well, we’ve developed the steering and have new dampers from Donnere to improve the handling as well as a redesigned engine bay that will make it easier for the mechanics to get to the engine.” 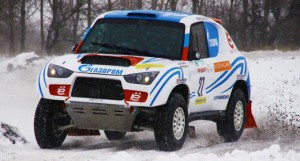 Most talked about car in the field is the Yoh-Crossover which will become Russia’s newest car when it starts production at the end of the year. Boris was also interested in it. “Alexandra Zhelunov is a strong driver and the car is well built. Also the National class which they are competing in is quite open so it will be interesting to see what they have made.” They made it around in a promising 5th place behind a well-driven Lada Niva.

Tomorrow the crews will twice tackle the 115km loop around the white hills of Belgorod and the weather will be much the same; snow and high winds. Right now the wind is howling through the gaps in the press centre windows like something out of a Steve King novel, my boots are on the radiator drying and I am looking forward to a long hot shower to thaw me out before tomorrow. 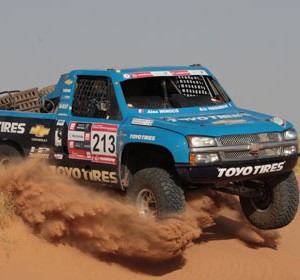